I don't mod cars the way other guys do. When it comes to the car itself, I will only mod a car that has little to no collector's value whatsoever. If it is a collector car, I restore because when you mod you wreck it. I've seen way too many cars that have been wrecked by guys that thought they were "improving" the car when in fact they just ruined it. After ruining it, they post the car for sale because they can't fix what they broke, and are betting that some moron will be stupid enough to buy their mistake. Happens often. Small example: A generic search for "Honda Civic" on my Craigslist local. Check out all the cars that have been lowered, chopped, dropped, have stupid wings, stupid custom wheels, clear tail lamp lenses, cheesy seat covers, custom computer chips that burned the engine and transmission out, etc. The list goes on and on.

If I cared about speed, I would build a rat rod; an open-wheeled, ugly, loud and ridiculously fast tub on wheels. But I'm not a speed demon. I'm the type that prefers class and luxury over how fast I can run a quarter-mile.

I have a formula on how to make a classy car out of one that inherently isn't. Assuming the car isn't a dorkmobile like a Geo Metro, the formula is this:

Here's an example of how well this works:

What you're looking at is a Pontiac Acadian, the sister car of its better known version, the Chevrolet Chevette. What this guy did to his car worked out amazingly well. Black paint, color-matched wheels, color-matched grille, color-matched door handles, done deal. Is it the snazziest looking car in the world? Of course not - but it's way better than the way it originally looked.

As a base of comparison, this is what an Acadian usually looks like: 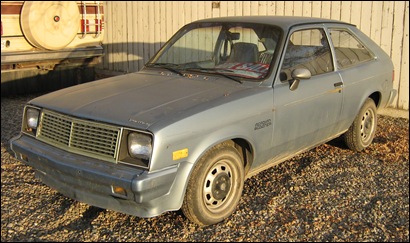 The difference between the two is like night and day. The plain Acadian is an embarrassing car to drive, but the blacked-out one looks rather decent and more or less gets rid of the embarrassment factor of being seen in one.

Note that on the blacked-out Acadian there are no stripes and no wings. It hasn't been lowered and in fact has the stock steel wheels painted to suit. The car even in its modified form looks respectable and adds a nice touch of class to an otherwise boring econobox.

This is what I go for, as in the kind of thing where the end result is a legitimate improvement over how it used to be.

Eventually at some point in the future I will be doing something similar to this. It won't be with an Acadian/Chevette because I don't like those cars, but it will start off with something plain that will be classier when finished.

For whatever ride I end up with, I'm going with white and not black. The reason for that is Florida. Black cars in a hot state don't mix because you'll get roasted. 🙂