the curse of not being overweight 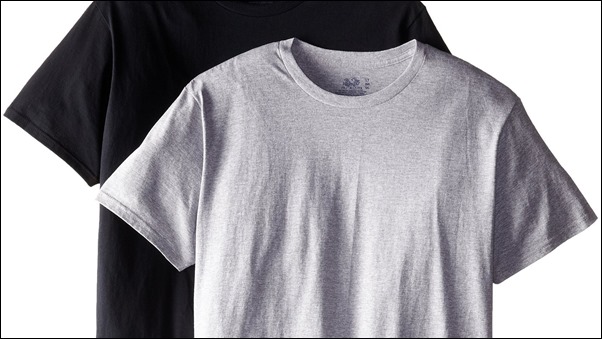 A men's t-shirt labeled as a "crew" is a reference to the neck. The neckline is round and no collar is present. Where a crew t-shirt is concerned (because there are crew sweaters,) there is no chest pocket present.

Why am I talking about these shirts? As a slim guy, I'm finding it increasingly difficult to find crew tees that actually fit me.

I'm not big. As in not bulbous. As in not husky. As in not portly nor pleasantly plump. As in not overweight. And that's a problem when it comes to buying clothes these days because clothes are made to fit the majority of the population.

A middle aged man (I'm 41 at the time I write this) who is not overweight is a rarity in America. Weight-wise, I am firmly planted in the minority of the population.

The Centers for Disease Control and Prevention (or CDC for short) statistic that everyone pays attention to is that 37.9% of adults age 20 and above are obese. That means almost 40% of the entire population has a body mass index over 30.

I think the scarier figure, also from the CDC, is that the percentage of all adults 20 and over who are overweight with a BMI of 25 or greater, including the obese, is 70.7%.

This literally means that only 29.3% - less than a third - of the entire adult American population isn't overweight...

...and that is why I have difficultly finding new clothes that fit correctly. Again, I'm in the minority here.

I'm going to talk about a recent experience buying crew t-shirts to give you an idea of how much it can suck. And then I'll talk about where I personally think America is headed concerning its weight problem.

I'll now describe the experience I had over the weekend that really opened my eyes as to how heavy America is now.

I'm at a Bealls Outlet store going through the crew tees. I ordinarily only shop for polo shirts and not tees at Bealls, so this was my first time specifically looking for crew tees there, which I thought was not going to be a big deal. I wear a size M (US Men's Medium.) This is the size that, when I find a shirt made to that spec correctly, really fits me nicely.

As I'm going through the shirts on the rack, I'm seeing some really dopey stuff. Batman and Superman logos, odd patterns and just dumb stuff like you'd see in a toy section or on a breakfast cereal box.

Then it hit me. These are kid's t-shirts in what used to be exclusively a full grown man's size. Adult guys don't wear this crap.

I check to make sure I wasn't in the kid's section. I wasn't. It was clearly labeled "Men's," yet there were all these dopey kid style t-shirt designs.

What I think happened is that the store simply lumped all similar-size shirts together and just kept the "Men's" category, even though it was really obvious a whole bunch of these shirts were not proper men's styles made for more-than-a-little-chubby kids.

After thumbing through about 20 shirts, I found a few that weren't totally stupid kid designs and went to try them on. None of them fit right, and one in particular was darned near an XL size even though labeled as M; this is an example of an M size made incorrectly. I don't and won't trust the size stated on any shirt, hence why I always try on shirts before buying, even for simple crew tees.

I left the store empty-handed. And it was definitely not the first time I've left a clothing store with nothing due to not being able to find anything that fits me.

I live in Tampa Bay Florida, so I have a ton of Walmarts around. I had good luck before buying well-fitting crew tees from one particular Walmart (which of course is the one that's not nearby and a good drive away from me,) so I went to that same store to see if I could find those shirts again.

As fortune would have it, the store did have a shirt very similar to the ones I bought before, and it was on sale/discounted, and it was even in a color I liked. I bought three.

Luck was on my side. But it took hopping around a few stores (Bealls wasn't the only place I went to before this Walmart) and trying on a bunch of shirts just to get these three measly crew tees.

Again, I had to drive all over creation and burn a bunch of gas driving just for t-shirts.

Presently, I can find clothes that fit me, but not without going through a battle every time I shop. Finding simple things like jeans and tees that actually fit correct is genuinely challenging.

There will most likely be a point where no proper men's M size style wear will be made anymore; I'll be forced to dress exclusively in polo shirts, button-down shirts and slacks instead. It will be a sad day if that happens, because in all honesty, I really like wearing jeans and tees. It's what I grew up with and I find them very comfortable. But if I can't find anything that fits, well, I have to wear something.

My predictions on America's weight problem

Many predict a world similar to how humans are depicted in WALL-E where every person is disgustingly overweight, nobody walks and machines attend to their every need.

I don't see that happening.

Don't believe me? The next time you go to any grocery store, find a line of people at the checkout and look what they're buying. I doubt you'll see any carrots or broccoli in their shopping carts. But I guarantee you will see plenty of soda, piles of frozen filth food and a whole assortment of other junk.

My prediction is that concerning America's weight, things will get worse before they get better, and America has not hit rock bottom yet.

When will this nation hit rock bottom concerning its weight? That I don't know, but I can tell you how to spot it. If everyone gets to a point where they're too big to even perform basic tasks, nothing will get done and the system will halt.

This is why I don't think we'll ever see a WALL-E world, because if there's nobody around to fix the machines when they break, how will we survive?