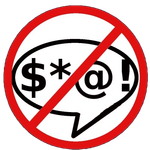 There are times when I curse like nobody's business. Some people know how to swear correctly while it's just doesn't work for other people. I can definitely do it.

When it comes to written stuff however, cursing is a different story. When speaking you can add in your own flavor when you throw out a curse or two. On a blog it comes across as being a whiner if you do it too much because there is no voice heard.

I searched my own blog to see how many times I've cursed in written form. I used all the biggies. The F word, S word and so on. Let's just say the search results that came back went on for several pages. 🙂

On read of some of the stuff I wrote, there were several instances where I cursed just for the sake of doing so; that's the completely wrong reason to do it. Cursing in written form should be treated like a fine wine where it's only used on special occasions.

For the posts where I was throwing out swears for basically no reason, I did some quick simple edits and replaced them with other words. For example, I changed "bitched" to "complained".

I didn't completely de-curse my blog mind you, because some stuff just deserved to stay as-is.

Yes, you'll still see a curse or two in the bloggos I write here, but just not as often. 🙂