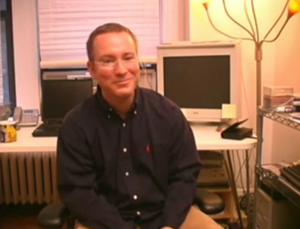 I was recently watching BBS: The Documentary, a film made in 2005. I don't know exactly when filming took place for the documentary, but I'm assuming the interview footage was shot in 2004.

There is one thing that makes the film dated at this point, and that's the amount of tube-type monitors you see. Almost every interview where a monitor is seen is a tube.

It is somewhat ironic that the film, which talks about obsolete technology a lot, shows quite a bit of current-for-that-time tech which is also now obsolete. In the screenshot seen at right from the film, I believe the monitor seen is a Sony Trinitron CRT, which at the time was a very ritzy monitor that made a loud BZZZMMM (self-degaussing) noise when turned on. The Trinitron was arguably the best CRT ever made. I had the fortune of using a few in the late 1990s at my first tech job, and yeah, they were great.

A quick history on the tube-type computer monitor

CRTs were the standard of home desktop computing for almost 30 years.

In the beginning, if the computer didn't have a monitor built-in (like the TRS-80), there was the option to use your television. For example, many people who owned Commodore VIC-20s never bought monitors because the VIC only had a 22-column layout, resulting in huge on-screen characters that were readable on even the smallest TVs. Other 8-bit home computers could also be used on the TV easily in most instances.

One of the best-selling actual computer monitors was of course for the best-selling home computer of all time, the Commodore 64. I mean, you couldn't have a C=64 without that awesome 1541 floppy drive and a snazzy 1702 monitor to complete the setup.

On the IBM PC Compatible side of things it was required to have a monitor to actually use the computer (80 columns fuzzed out too easily on a TV), so when everyone transitioned from 8-bit to 16-bit, CRTs sold by the ton because computer owners needed them whereas they didn't before.

Owning a PC was still a hobbyist thing for a few years until... Windows 95. Microsoft launched this massive bigger-than-life advertising campaign, it worked, and everyone wanted a computer. CRTs as well as every other type of computer peripheral you could think of went through the roof in sales.

Now at this point you have this massive amount of CRTs out there from '95 to '05 in addition to all the CRTs made before that point.

That's a ton of tubes, and not the internet kind.

Whenever I see the desktop CRTs in BBS, I sometimes wonder where they all ended up. Did they get recycled properly, or are they all buried deep in landfills across the country?

I guess we'll never know for sure.