thrift stores are getting chock full of plastic electronics crap 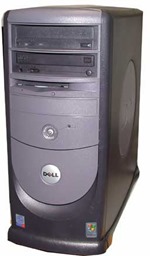 Pictured is a Dell Dimension PC from the very-early 2000s. Parts for these PCs at the moment are plentiful, so if you wanted to fix one up, it's actually pretty easy. The one thing to know about these boxes at this point is that the CMOS battery will probably be as dead as a doornail and will need a replacement.

In the 1990s, PCs were absolute junk. Fortunately, most of them have been destroyed or recycled.

In the early 2000s, the PC was still the king as far as home computing was concerned. Most were built much better than the ones in the 90s. Many run without issue and only require a new CMOS battery as stated above along with new cooling fans (the original fans at this point take way too long to spin up, if they spin up at all).

The heyday of those once-familiar gray-and-grayer Dell computer boxes was from around 2001-2004. Right now there's probably not a thrift store anywhere in America that doesn't have a few of these PCs clunking around...

In addition to the Dell PCs (you see Dell the most because that's what most people had), you'll also see a ton of Sony HandyCam camcorders. The first thing to go on those is the battery, of course. And yes, replacements are readily available for those dead batteries, ranging from $15 to $60, depending on model. 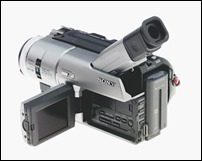 A model of Handycam you will still see for sale on Amazon is the DCRTRV103 model (pictured) in used and refurbished form. Yes, people can and do refurbish these things because some love them so much, even though they are woefully obsolete (they use Hi8 tapes if that's any indication of how old the thing is).

What's happening is that thrift stores are getting clobbered with a whole bunch of obsolete plastic electronics crap from the early 2000s.

A massive amount of people started dumping their old electronics from the early 2000s starting last year in 2013 and is continuing on this year in 2014. Why? Mainly because of better smartphones and tablets.

The smartphone has graduated to a point where its photo-taking and video-recording ability is good enough for most people, and this is why you're seeing so many cameras and camcorders from the early 2000s in the thrift stores.

As for the huge amount of Dell PCs in the Goodwill and thrift shops, you're seeing a lot of those because in April of this year 2014, Windows XP is finally dead. Microsoft is not going to be sending out any more security updates after April of this year. Given that most people don't switch OSes and simply buy a new computer when they want a new OS, they've been dumping their old Dell boxes for a tablet, laptop or both.

The worst time for the electronics hoarder...

Some guys hoard electronics, and you can find them on YouTube easily. These are guys who buy up old Dell computer boxes, old Sony Handycams, old digital cameras and so on for the simple reason they're cheap.

The electronics hoarder's mentality is this: "I can use that!", followed by, "I can fix that up and someone will love to have it as a collector's item!"

Both of those are stupid beliefs. No, Mr. Electronics Hoarder, you can't use that old thing and no, nobody wants your old thing even if you refurbish it to absolute mint condition.

A classic example of an electronics hoarder is anyone who uses a big, clunky PC just to play music on. There are guys, and I kid you not, who will put one of those monstrosities right next to their bed, with keyboard, monitor and all, and use it only to play music and nothing more.

Now of course, the exact same thing can be accomplished with a Timex T227 and a cheap small MP3 player (like a SanDisk Sansa) or a smartphone (or even a featurephone for that matter). But the hoarder prefers to put a big, LOUD computer box (those fans do make noise) right next to his bed instead.

In the early 2000s, yeah, you had to do it that way. But not anymore. Just get a clockradio with a line-in port like the T227, attach something that plays music and there you go. Simple, functional, quiet.

Alternatively, don't use the clock radio at all. Just use the phone. But if the speaker on the phone sucks - which they all do - you can bump up to a louder speaker with the clockradio. If you're going to put something on the nightstand, at least have it do something functional without taking up a bunch of space.

The best time for the electronics hoarder?

There is a positive to hoarding electronics from the early 2000s, and that positive is that you can "upgrade" an old computer box into a usable machine if you approach it the right way and use stuff that's actually, well.. usable. More specifically, usable without being annoying.

The right way to use old PCs:

I guarantee you will not be doing video editing or any major gaming on your old clunker of a PC, so you do not need more than 64GB of space. Not at all. In fact, most could get away with using 32GB quite comfortably.

Once the OS is loaded, I'll also guarantee you will notice no difference in speed at all between the old hard drive and the new USB stick storage. Also, enjoy the silence. With that old hard drive unplugged, there's no assault on your ears from its whining.

The right way to use old electronics:

Simply put, you don't. But if you must, this is how I suggest going about it.

An example good old electronics purchase would be a new-in-box Microsoft Intellimouse which is both PS/2 and USB wired. At the time I write this, that link is to some guy selling off a whole bunch of them new-in-box. They were probably manufactured 10 if not 15 years ago. But that doesn't matter because other than the scroll wheel, the mouse has no moving parts and will work perfectly even if it's more than a decade old. And yeah, he's charging a lot for it. I know why. It's because the mouse is in fact that damned good.

Some older stuff is better than the newer stuff, and the Intellimouse is one of them - but only if bought new-in-box.

Don't hoard electronics. Do. Not. Do. That. Only buy what you need and what works 100%. Otherwise it's just plastic crap that should be tossed in the garbage.