Would be a waste of money but worth it, kinda 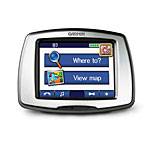 Garmin has a nasty habit of releasing new models quickly and it's tough to keep up because you can't exactly upgrade a mobile GPS unit to take advantage of the features of new models.

I currently own the StreetPilot c340.

The only advantage of the 550 over the 340 is that the display has anti-glare and is brighter in daylight. That is a feature I could use. I do encounter some glare at times during bright daylight.

Note above that I said "That is a feature I could use".

The features I don't need (but would be cool to have) are:

The ability to hook up a cell phone to it via Bluetooth. Neat.

Supposedly grabs and keeps signal better in heavy foliage and near skyscrapers.

Otherwise the 340 does everything just fine.

Would I ever use the Bluetooth feature? Probably not because I don't ever plan on owning a feature-laden cell phone. That's a cost that doesn't equate to better and more efficient communication in my opinion.

The MP3 player? Cool, however the same can be accomplished with a decent car stereo - and it would certainly sound ten times better compared to the tiny speakers in the 550.

As far as the signal strength is concerned, the only time I've ever had any Garmin GPS I've used drop a signal completely is when I traveled through a tunnel that went through a mountiain - and that's pretty extreme. I mean, you can't even get FM radio in those conditions, so why would you expect to get any other type of over-the-air signal.

So I suppose the only feature I would want is the better readability with the brighter daytime lighting and anti-glare.

I think I'm writing this to talk myself out of buying it... I really don't need it. This is not a "beat the Joneses" thing.