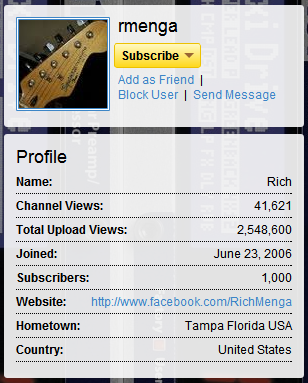 Getting to the 1,000 subscriber count on a YouTube channel is a big deal for some people.

This is due to the following:

Subs are not true fans for the most part

Something YouTube is very infamous for are sub whores. They will subscribe to your channel on the expectation you will sub back. I almost never do because I can easily check someone's channel via a bookmark or RSS feed.

The term for this is "sub4sub". My answer to this is no, and bug off. You subbing me does not automatically qualify you for a sub back, so bug off and have a nice day.

YouTube's community is completely self-contained and never connects to anything else, much to Google's chagrin. Why? Because they have the #1 video site on the internet, yet it's nothing but a huge island on the social media front.

What this means is that if you're popular on YouTube, it's only on YouTube and nowhere else. That's bad.

When you're popular on Facebook or Twitter, the social nature of those sites branch out easily to other parts of the internet like blogs, forums and so on. On YouTube that never happens. This is incidentally one of the reasons I have comments turned off for almost all my videos there, because the community communication there is worthless.

In other words, no matter how many subs you have, it will never branch out beyond that site whereas just about anywhere else it will.

You can think of big numbers on YouTube the same way as getting a really high score in a video game. Okay, so you play, play and play some more, then finally get the high score and you're #1.

Even if you're a partner user, your numbers mean nothing.

YouTube as I've said many times before has the absolute worst community on the internet; this is why I call YouTubers YouTards.

Facebook community pages, forums, Twitter and blogs on the other hand are all a million times better and always have been.

I use YouTube for nothing more than the engine; it allows people to keep up with my videos easily, but damned if I ever use it to communicate with people directly because in that department it has always sucked complete ass.