I have another post where I recommend 6 guitar pedals, and I admitted that you should not go cheap when it comes to pedals, so the ones listed there are on the higher end of the cost curve.

END_OF_DOCUMENT_TOKEN_TO_BE_REPLACED

Tiny amps are best described as "cute". Definitely not that loud, but still cool to have. They make for good decoration more than anything else, so if you want something on your desk or shelf that says, "I'm a guitar player", the tiny amp is a must-have. Your friends may say, "I would never buy one of those", but that's not true. They totally would.

Here are a few tiny amps, most of which have a belt clip so you can actually wear the thing while playing through it. And yes, these are all real combo amplifiers, all mini-sized.

Click on any amp below to see the price, specs, color choices and so on. 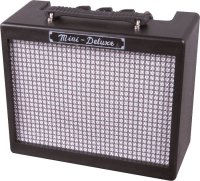 The classic Fender silver-face amp look in a miniature size. 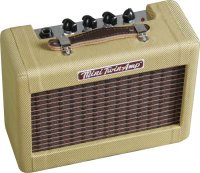 This is basically as close as you can get to a tweed look in a tiny-sized amp. The chrome and handlebar are a nice touch. 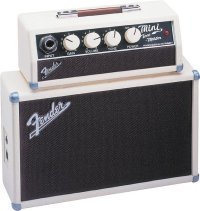 This one has the classic 1960s Fender amp look and actually separates the "head" from the "cab". 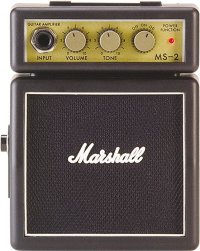 This is arguably the most popular mini-amp, and yes I actually did own one years ago when it was brand new at the time. The MS-2 basically hasn't changed at all, but that's okay because it still looks cool.

This one, I admit, is a bit ridiculous because it's basically two MS-2's stacked on top of each other. It is however a true full-stack. How much louder it is than the MS-2 I have no idea. 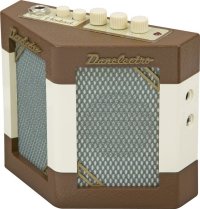 Danelectro has retro down to a science, and the DH-1 definitely delivers. There's just something about Danelectro style that's just plain cool. 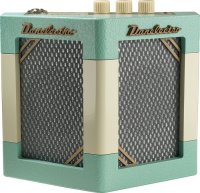 I'll be honest here - I'm not exactly sure what the difference is between the DH-1 and DH-2, so I don't know whether it has more or less features/power/etc. But it does have that awesome aqua box look to it. 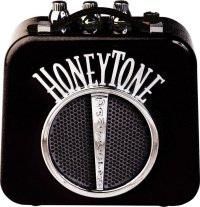 This is my opinion is the coolest-looking mini-amp in the list. It comes in 4 different colors (including cream), but the black one is so spot-on with its retro look, and nothing else in this list can touch it. And it's cheap! 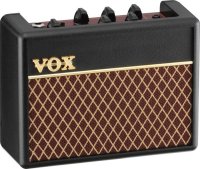 If I'm not mistaken, this is the most expensive mini-amp in the list. Why? Because it's more than just an amp. It has 66 rhythm patterns in it and two 3-inch speakers for plenty of sound out of a small package.

Which is the best?

There's no real "best" amp here, because you can't really expect much from amps this small. However the ones that are the best bang for the buck both for style and functionality are the Fender '57 Mini, Marshall MS-2 and the Danelectro Honeytone N-10.

There are times when I really loathe dealing with text formatting and want to use a plain text editor for all my blogging.

The editor in WordPress sucks and always has. It's always been way too "heavy" to use in the browser, and this is one of the reasons I use Windows Live Writer.

WLW is good and all that, but it positively sucks when it comes to loading up things like drafts or articles you published before.

The only good alternative to this crapola is ScribeFire, which is what I'm using now to write this with. I like it because it's really fast and runs locally in my browser. It also handles the fetching of previous posts a whole lot easier. My only complaint is that when you go to insert things like images, there's no image resizer. Yeah, there's a image dimension resizer, but that doesn't affect the original size of the image. When you resize in WLW, the entire image, file and all, is resized and that's part of what makes it so awesome.

Even with the lack of a proper image resizer, I'm going to give ScribeFire a go anyway. What sells me on it are two things. First, I can compose using plain text if I want and on publish will "convert" properly to formatted stuff. Second, draft handling is just so much easier in ScribeFire.

Yeah, I'll still use WLW and might even switch back to it if ScribeFire doesn't work out, but at least I have a real alternative that actually works.