Does the DigiTech Nexus software for the RP360 really work? 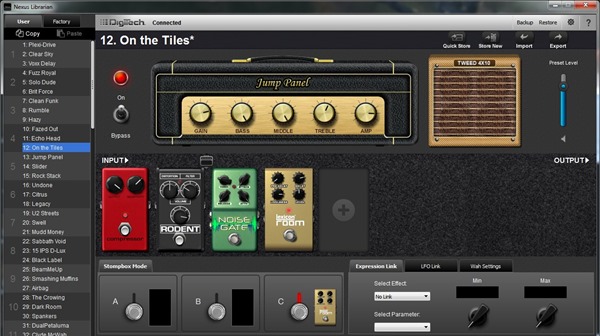 It's time for some software goodness.

If you connect it properly, yes.

The first thing I recommend is installing the Nexus software first BEFORE connecting the RP360. Why? Drivers.

Second, connect the RP360 using a direct connection, as in unit-to-computer. DO NOT use a USB hub.

Third, backup all your user presets even if you've never modified any.

Fourth, if the software states your RP360 or RP360XP needs a firmware update, do it. It will make editing presets easier. While updating the firmware, LET IT FINISH. Don't do other stuff on your computer while it's taking place.

An example of a preset I made (with free download)

I was able to get a pretty cool Zeppelin-type sound for my Squier Strat using a minimal setup.

Will I be providing more presets in the future?

I have to experiment with the software a bit more, but yes I believe I will. Watch for it here.