distro is a go

If you asked me in 2005 whether I thought distributing music digitally was a good idea as an independent artist, I would have said no. Pun intended, my tune has changed on that.

I've actually had ways of doing distro for a while, but I couldn't use it because I didn't have songs ready. Well, I finally completed 5 songs. After that I started getting the wheels rolling officially with digital distro and soon enough my tunes will be available for download on iTunes, Last.fm, Amazon, Spotify, etc. It will take anywhere from a few days to a few weeks before the whole process is completed.

The total cost to do the distro proper was 59 bucks, the majority of which went into licensing rights, getting a bar code, etc. Worth it? Absolutely. In the way I did it, all the major distro sites are covered which is convenient both for me and those looking for my music, because fans can pick their preferred digital destination of choice. That's a win-win situation as far as I'm concerned.

As soon as I'm "live", so to speak, I'll make an announcement here.

As I write this it's a balmy (as in balmy-for-Tampa) 78 F outside right now, and it's been gray-ish pretty much all day today.

Well, that's not how it is in the Connecticut town I grew up in. A friend sent this - today: 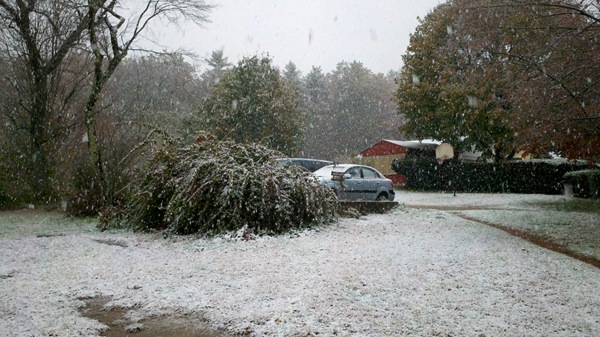 That's right - you're seeing snowfall in October. That's something the region hasn't seen since 1978, which was a year that one of the worst winter blizzards ever happened. I was only 3 years old then, and I can still remember it.

Yeah, snow can be pretty, but also deadly. While I made it a point to winterize my car really early (thicker wiper blades, snow-formula washer fluid, purchase of new ice scraper and can of de-icer, etc.), I can pretty much guarantee absolutely nobody up there was ready for snow this soon.

Projected snowfall inland is supposed to be somewhere between 2 to 5 inches. That's not a lot, but enough where you'll see a bunch of fools driving around with bald tires on their cars bashing into everyone else; of that you can be certain.

What makes the above photo just plain weird is that the trees still have leaves and they're not even fully turned yet.

why i won't be pressing CDs

My collection of songs is nearing completion and will be released relatively soon, but one thing I won't be doing is pressing any CDs. The distribution method I'll be going through does offer it as an on-demand thing for those that actually want the disc (I think?), but as far as actually buying stock, no way.

Any artist that presses CDs these days is an idiot for the simple reason that nobody wants them. Nobody carries around a portable CD player. Both kids and adults either use iPods, cell phones, their computer of a combination of all three - but no discs. The only time anyone listens to a disc anymore is in the car, and only if the car does not have an AUX port for an iPod or cell phone.

If I was touring (and who knows, maybe I will?), the only merchandise I'd be selling at shows would be t-shirts and vinyl records. 45 RPM speed, specifically. Why vinyl records? Because it's way more attractive than a CD, is an instant collectible, people will buy them just because it's vinyl regardless of whether they like your music or not, and most importantly they actually sell because of their special and unique nature.

Back in the early 2000s when I was still living in New England there were several regional "scene" web sites along with a few crappy "labels", all of which went under. The reason they all failed is because the only audience those sites ever attracted were musicians and not actual fans. When you have a site that's all-musician and no-fans, that's a recipe for nobody-cares stew.

Before everyone had iPods and cell phones that could play MP3s, all these scene/label sites were hocking CDs from various bands, the vast majority of which were metal bands that just plain sucked. Very few people actually bought discs even back then. Heck, I even knew bands who pressed CDs that literally had piles of unsold copies, and again, remember this is before the whole iPod thing. If they didn't sell then, what makes anyone think people would buy them now?

In the end, if you really want a CD of my stuff, I'm pretty sure the distro method I'm using will have an option for it, but otherwise it's all-digital first and foremost.