i see the light, and it's blue

I bought two new 80mm fans for my big box computer today. The cheapest ones at CompUSA were the lighted kind in red, blue or green. I chose blue. As I've said before, blue lights are cool.

Here's a photo of the fans. Y'know, as much as I don't want to admit it, it does look pretty cool. 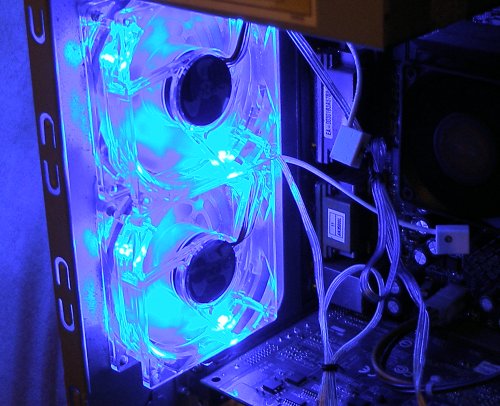 Today also marked the day I sent my payoff "power check" so my auto loan gets re-financed. As a precaution, I headed over to the post office and sent it as Priority Mail with Delivery Confirmation. Cost: About five bucks. Worth it in my opinion to save hassle.

I've noticed over the years that sending any mail in this fashion does get processed faster. Not only does it arrive sooner, but the big green sticker on it lets the recipient know I'm tracking it.

I'll be picking up my sister tonight to head up to Inverness. Not looking forward to it because of the timing. Bleah. Ah, well. I'll get over it.