Note: I will be posting the rest of my Universal stuff soon. I haven't yet because there's a lot to go thru. 🙂 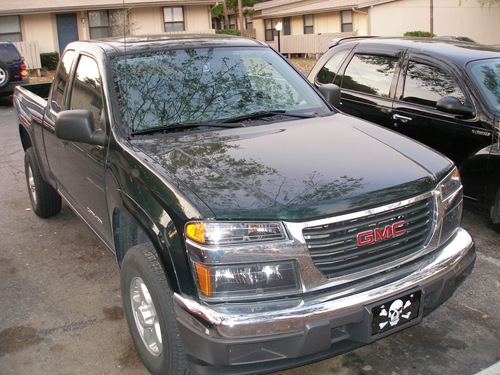 Because this is what usually matters to most people, here's a list of things that have worn out, been replaced or gone wrong with this truck since I bought it new in January 2005.

Other than the aforementioned, everything else is fine so far.

Some vital stats on my truck:

You may ask (and rightly so) Isn't almost 48,000 miles a lot for an '05 vehicle? Yep. Most people barely break 35,000 for any vehicle over two years old. With me, I pile on the miles quick. It's been that way ever since I started driving. To be honest, I've slowed down a bit. I used to routinely put on 30,000 miles a year, but I've knocked that down to about 24,000. Needless to say, I know the interstate system intimately. 🙂

Since being in FL...

I have noticed since being in Florida that the tried-and-true selling point "Florida Car!" has a loud ring of truth to it. It's true because unless a car lives its life next to the beach (salt/sand from the ocean), the only elements it will ever encounter is heat and rain. No snow. No ice. No hail. No mud. Just asphalt. It's very common to see cars here that wouldn't survive anywhere else for too long.

For example, a 1981 Buick. Any Buick. There are more than a few driving around. Some look beat up, but are still very driveable. This same car would not exist in Connecticut unless it were rusting off its frame - literally.

The Canyon has taken very well to Florida. She "likes" the predictable warm weather, the smooth-for-the-most-part roads, the long interstates and county routes. The 4-cyl motor keeps on keepin' on and routinely gets 23 to 25mpg on highway - unless I have my A/C on (then it drops to 19-23mpg - and I'm guessing there).

I also notice the Canyon seems more "happy" in-town compared to the highway. She likes zipping thru parking lots and side streets more than highway cruising.

So far, so good. Hope it stays that way.