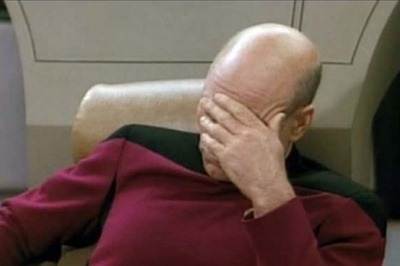 The reaction I have whenever someone describes a sound as warm.

A while ago, vendors that sell guitar gear just said screw it and started using words and phrases that make no sense at all when describing guitar sounds.

A sound is not measured in Fahrenheit nor Celsius degrees. Never has been and never will be.

Moron: How do I get a pickup to sound warm?
Me: Put it in the microwave.

If this were taken literally, it would mean the sound is invisible, meaning not there at all.

Moron: Wow, the sound of this pickup is so transparent that I can't even hear it!
Me: Try plugging in your guitar.

Chunk does not describe a sound. It can describe a physical thing, such as "a chunky neck", which would indicate a thick piece of wood. But for describing a sound? Nope, doesn't fly, sorry.

Moron: How do I get a chunky tone?
Me: Fart into a microphone.

This infers that a sound is a tangible thing I can hold in my hand and polish to a mirror shine, with one exception... that's impossible.

There is no such thing as a crunchy guitar sound. Actually, that's not true. If you put a guitar pickup in a blender first and have that rip it apart, then it's crunchy, even in milk.

Who is the worst offender of using these words to describe sound?

Take a look at the descriptions for pickups for yourself. Time after time, again and again, you will see the words I mentioned above describing the sound of pickups for DiMarzio, EMG, Fender and just about any other major brand of pickup you can think of.

Pickup manufacturers are obviously smart enough (most of the time) not to use words that make no sense when attempting to describe a sound using the written word. On pickup manufacturer web sites you usually won't see the "forbidden" words.

Is it the customer's fault we have words describing sounds that shouldn't be there?

Somewhat. There are moron guitar players out there that won't buy a pickup unless the description contains "warm" or "crunch" or something equally useless to describe the actual sound a pickup makes when installed in a guitar.

However, part of the reason the customers use "forbidden" words to begin with is because vendors use them in product descriptions, and that's most likely where the customer saw those words first.

My suggestion to you is this: Don't use words to describe a sound that make no sense.