A popular department store years ago at the stomping grounds was a chain called Ames. And would you believe, I kid you not, that there's a fan club for this defunct chain? It's true.

Well, here's another tale of woe from where I grew up. The Ames in Dayville, which was one of the first in the state, is still there. Abandoned. Closed up six years ago and was left untouched otherwise.

I found some photos taken in February 2009 of the place. The entire set is here, but here are the.. um.. highlights. 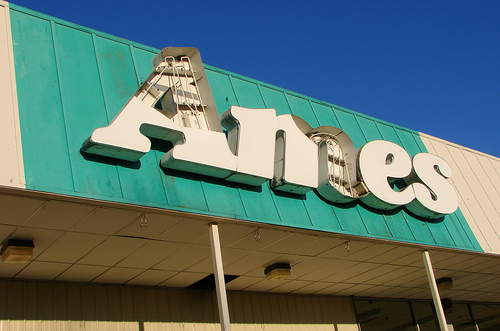 Above: Busted up neon signage. The damage was probably done by kids who threw rocks at it. 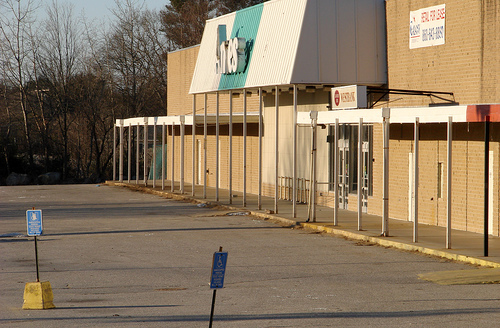 Above: Barren old parking lot. The lot is completely empty since the supermarket directly adjacent to it closed shop as well. 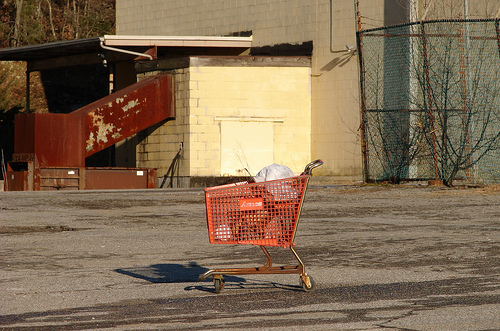 Above: This one really got me. It's an actual Ames shopping cart. It's still there and completely rusted. Incredible.

This is indicative of how most things are treated in Nowheresville, USA where I grew up.

Where I live in Tampa this doesn't happen. If a business goes under, the building that's there is sold and rebuilt or destroyed and rebuilt where new business can come in.

But not in Dayville.

When a business goes under there, it stays under for a good long time. So far the Ames has sat there untouched for six years. You think it'll make it for ten? It's a distinct possibility.