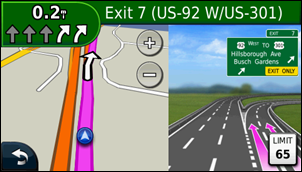 I've been wanting a Garmin automotive GPS unit with the LM (lifetime map) update option for a while now and finally went out and bought one. The reason I hadn't until this point is because the units with LM were too expensive until very recently. As of yesterday I now use a new Garmin nüvi 40LM.

The only reason I bought the 40LM was for the lifetime map update option and nothing else. I lost features by switching from a 255W to the 40LM, but the money I save from not having to buy map updates is a very acceptable tradeoff.

There's only one thing I miss from the 255W that the 40LM doesn't do, and that's ecoRoute. Or to be more specific, the "Less Fuel" routing option, which is kind of like the happy medium between "Faster Time" and "Shorter Distance". I won't cry a river over not having that routing option anymore as I was navigating with GPS way before ecoRoute ever came into existence, but yeah I'll miss having the option there. But I'll get over it quickly considering the cool stuff the 40LM does that the 255W doesn't do.

Other than the lack of ecoRoute, the 40LM does everything better than the 255W did. The screen is way more responsive to the touch, the Lane Assist feature (seen above) is very good, and the processor is fast enough in this one where I'm actually comfortable using 3D maps again.

For the longest time I've been using the 2D "Track Up" map view option with Garmins because the 3D view, best described as a helicopter map view, sucked. The processor was just too slow to handle it most of the time and screen draws were slow and choppy. The 40LM is good enough to show smooth animations that make 3D-view good to use: 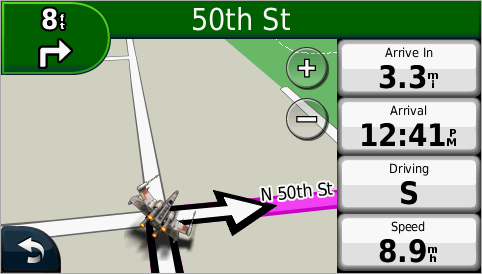 Yes, I am using an X-Wing Fighter as my vehicle icon. That's here.

After all this time, Garmin finally put information on the main map screen that they did like they used to with the big 26xx/27xx/28xx models. Four buttons are at right. The top 3 can be changed to any one of these: 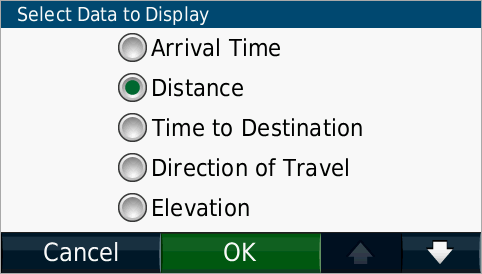 The fifth option that you don't see by hitting the down arrow is "Time of Day".

The auto-zoom is also finally done right. Before the map would zoom out too far or too close, but Garmin got it correct with this one.

It's also good that the size of the fonts is bigger pretty much everywhere so you can actually, y'know, read the information from the driver's seated position.

I plan on packing on a lot of miles with the 40LM. It's basic and doesn't have the advanced features, but that doesn't bother me because it's primary purpose is to navigate; it does that spectacularly well.