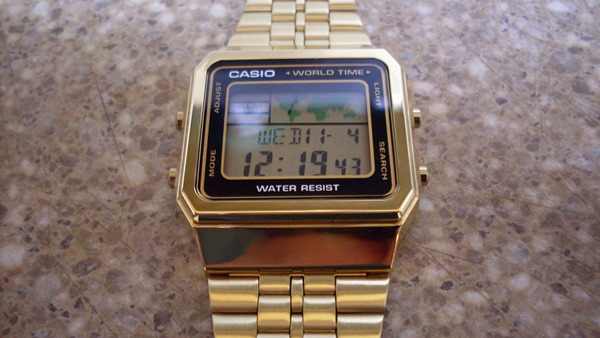 I actually received this watch by mistake.

A few posts ago I mentioned that I had a A500WA-1 model on order. I received a watch, but not the one I ordered. Instead, I received a A500WGA, with "G" for "Gold." And as you'll see from that link, gold models sell for 33% higher to almost double the price of the chrome versions. The reason? Scarcity. Gold versions of their watches are far fewer in number compared to other models.

And no, there isn't any real gold on this. The band is stainless steel with adjustable clasp, and the case plating is... well, I don't know what it is, actually. Could be plastic, could be metal. I'm not exactly sure.

There are several variants of the A500WGA. There's the A500WGA-1, A500WGA-1D and A500WGA-1DF. In the way Casio makes watches, certain models are made for certain markets. Mine, according to its tag that came with it, is a 1DF model: 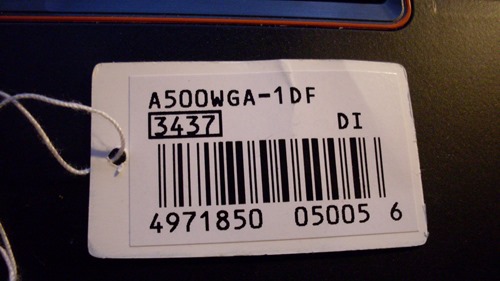 Too complicated for most people, but I genuinely find it useful

Being I already own an AE1200WHB-1BV, I already knew the A500WGA as the feature sets between the two are identical in every way. You get 5 alarms, countdown timer, chronograph, a bunch of time zone options, forward/reverse digit direction, ability to mute button press beeps if you want, etc. The watch is loaded with goodies.

I know my way around the A500W because of the AE1200W. But for most other people, yeah it can be difficult at first just because its packed with so much stuff.

I'll put it another way. Casio digital watches generally act mostly the same, with minor variations from model to model. If you know Casio G-SHOCK or have ever owned a Casio watch with an alarm or countdown timer feature, you can figure this one out.

At this point I've every feature on the watch memorized and know where everything is. If I want to jump between alarms, turn DST on or off, switch from 12-hour to 24-hour or do whatever, I can, and do it all from memory.

Now although I received a watch significantly more expensive than the chrome version, I did entertain the idea of sending it back. Why? Because in gold, it looks borderline tacky.

After mulling it over, I've decided to keep the watch. It is the first gold watch I've ever owned, and I figure that I must have been destined to own this timepiece since I received it by mistake.

If you're a Casio digital watch fan, yes, you have seen this before. The original model from the 1980s is the A300U, and looks like this: 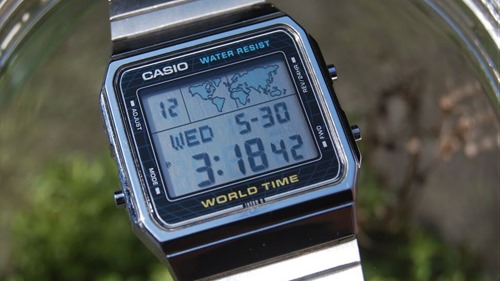 I personally would not seek out the older A300U. It commands way too high of a price on eBay, but even if money were no object, I wouldn't buy it anyway because of practical reasons. The time zones have changed since the A300U was made, and the recessed upper left button is annoying to use, whereas all the A500W's buttons protrude (that's a good thing.)

Do I plan on wearing my gold Casio watch regularly?

Yes. And that does mean it will get nicked and scratched up. I know this and am willing to accept that.

I know I just horrified any Casio watch collector that read the above. To those collectors, let me put your mind at ease right now. In less than just one day of wearing this watch, and wearing the watch safely protected under a cotton long-sleeve shirt cuff, the bottom of the casing somehow got a hairline scratch. It's barely visible and can only be seen if the case is tilted at a specific angle. My photo at top may not show it, but trust me, it's there.

Again, that's just from owning the damned thing one day. The casing on this particular Casio watch is a total scratch magnet. Scratches will happen and there's nothing I can do about it.

Now this doesn't mean I'm going to rough up the watch. I will do my best to keep it looking nice. But I don't think there is any way to wear this thing and keep it 100% scratch-free.

For collectors out there, what I'd say is that if this watch appeals to you and you want to collect it, buy this timepiece but never wear it.

Another Casio watch I own, which I may write a review on at some point, is the B640WD-1A. This is the one I'd wear and be less conscious about damaging it, given the case is frost-painted resin and has true water resist. The A500W does have water resist, but I think it's better described as splash resist. I wouldn't shower with the A500W. Not a chance. With the B640WD, I could shower with that and not care. And with my AE1200, oh yes, that one can absolutely be showered with.

The A500WGA is, as said above, loaded with goodies. And I do use those goodies.

Looks-wise, either you like the gold or you don't. At this point, I'll say the gold is growing on me. I'm not totally in love with it, but yeah, it's classy, I admit. But I meant what I said in that it's borderline tacky. Not absolutely tacky, but just nipping at the heels of being that way. The only thing keeping it not tacky is a clean, uncluttered look.

My only complaint is that the casing is really scratch-prone. That's the one fatal flaw of this timepiece. It's a-okay otherwise.

On a final note, part of my reason for getting this originally was the low profile so I could specifically wear it with long-sleeve shirts where the cuff would slide over the watch easily. A Casio F-91W, which is as thin as a Casio watch can possibly get as far as I'm aware, has an 8mm thickness. The metal-bracelet version of that watch, the A158W-1, also has an 8mm thickness.

The A500W has a thickness of 10mm. Believe me, it's plenty thin enough to slide under the shirt cuff without a problem. If you want super-low-profile with the metal band, get the A158 (or A159 for a gold,) but I think the A500W looks better. That, and it has many more features.