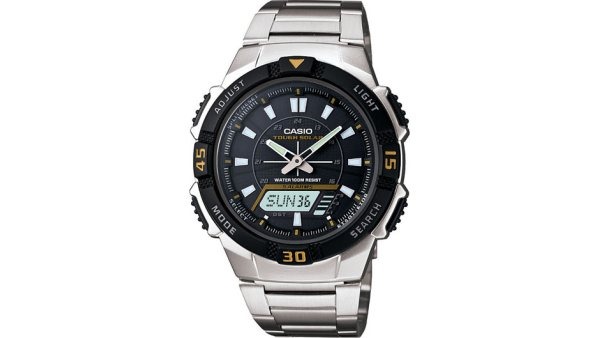 This is a sleeper in Casio's lineup and I have to talk about this one.

For the first time I'm actually recommending an analog-digital timepiece. Ordinarily, I think ana-digi watches are awful. But this one is packed with so much stuff for such a good price that it's tough to pass up.

The first thing I'll mention is that this watch comes in many flavors. All the cases are the same but there's a huge amount of choice here. If you look at the Casio AQS800W models, you'll see black dial with "racing" orange or white numbers on the dial with the resin strap. If you look at the Casio AQS800WD, shown above, this is the sleeper piece.

Here's a rundown of the specs:

Now as for why the AQS800WD is the sleeper (the D indicates a metal bracelet,) this is the feature:

Now let me explain why this is so cool.

While true that having a backlight function and luminous hands/markers is redundant, the fact it actually has it on a watch packed with so many features is simply incredible.

Basically, the AQS800WD is a world traveler's watch, a diver's watch and a runner's watch all in one.

It is not easy to find a watch that does all this stuff all at once. If you were ever to call any timepiece the Swiss Army Knife of watches, the AQS800WD is it.

Are there any negatives? Yes, because no watch is perfect.

First, it doesn't have a second hand. The seconds are counted on the digital display. Yes, this means this watch does not tick. Or rather, it does tick, but only once per minute.

Second, the digital display is itty-bitty. Not the easiest thing to read. But the analog display is obviously very readable.

Third, between 6 and 7 o'clock or whenever the minute hand is between 25 to 35 minutes, the digital display is partially blocked. Not really a big deal, but slightly annoying.

Fourth, the bezel doesn't rotate. However, this is okay due to the fact the watch features two timers which is what a rotating bezel would be used for. 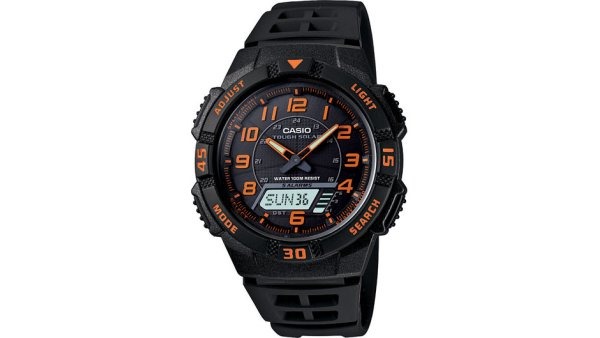 From this link you're going to see orange-text, white-text and the insane all-red case version.

I have to admit, it's a very cool look for one reason: It totally looks like the tachometer gauge of a fast sports car. That's just badass.

With the resin version, you lose the metal bracelet and luminous hands/markers. Otherwise, it's functionally identical to metal version.

It should also be noted there is a huge weight difference between the metal and resin versions. The metal version is 89g in weight while the resin is just 33g.

Does the metal version have a metal case? No. The case is still painted resin, and that's why the watch weighs 89g and not over 100g.

Which should you go with?

In all honesty, both are great but the AQS800WD is the one with everything plus the lume.

The silver dial version, which is the AQS800WD-7EV model: 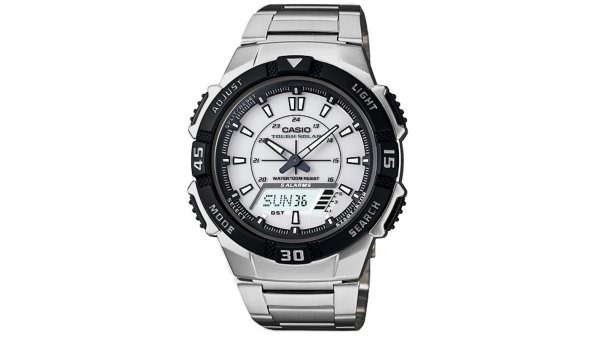 The look of this one is spot-on for me as it's very monochromatic. Blacks, grays and silvers are all you see with no varying colors, save for the lume at night.

If anyone is feeling generous, I added this one to my Amazon wishlist. 🙂 And again, yes, it's the same watch as the two above, just with a different appearance. Like I said, this particular model has a lot of variations to it.

The AQS800WD is obviously a sports watch first, so it's not like you could wear it with a suit, but for pretty much everything else you can think of, this is a great daily beater with some nice style to it.