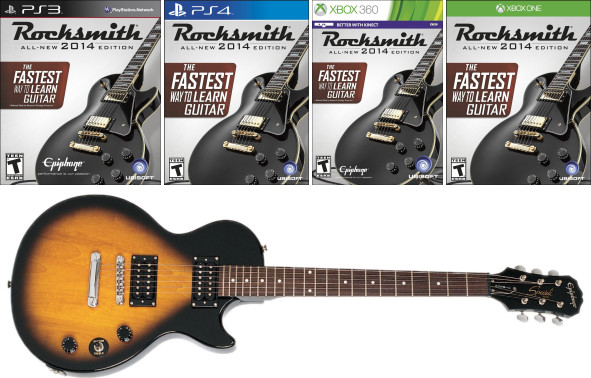 This is the way people learn guitar these days, so you might as well get off to a good start.

Being that Christmas is just a tick over two months away, now is the time to buy a beginner's guitar, guitar pack or bundle, which is what this post is about.

Above is an Epiphone Les Paul Special II. You can buy the guitar alone or as a beginner pack with extras like case, amp, picks and so on. There's also a "Slash" beginner's pack that costs a little more, but I admit does look pretty cool.

When you want to get it all in a single bundle that covers everything, that's where the Rocksmith bundle makes the most sense.

Now before continuing, neither Fender nor Squier has a Rocksmith bundle (and they really should,) so when shopping for something like this, it's basically all Epiphone Les Paul. Sure, you could piece together a bundle if you wanted to, but in the end it's better to just get the whole thing all at once.

Here's some links so you know what this bundle costs.

Okay. Now that you've seen the price, it is true if you bought the guitar pack itself and then Rocksmith for PS3, for PS4, for the 360 or for the One separately, the price is basically the same when put all together.

However, it's decidedly inconvenient to buy it that way.

Is this Epiphone Les Paul any good?

Yes, but these are the questions buyers of this guitar bundle really want to know:

Is it an adult-size guitar?

Could my kid use this in a band?

Is the amplifier the bundle comes with loud enough to play with a band?

No (which to any parent is a blessing,) as this is a starter bundle we're talking about here. For a band, you'll need something louder. A Fender Mustang II V2 40-watt would do the job. And if the kid wants something louder than that, make him or her buy it with their own money.

Would this guitar be good enough for taking lessons with a human guitar teacher?

Yes. If you send your kid to take guitar lessons, this Les Paul is plenty good enough for that.

Is the guitar "upgradeable?"

That's a bit of a loaded question. The simple answer is yes, any guitar can be upgraded with better pickups, better tuners and so on - HOWEVER - if buying this as a first guitar for a kid, I strongly suggest not messing with the instrument. If the kid "gets the bug" for wanting to tear apart a guitar and modify it, the better option is to buy a second cheap guitar (preferably a used one off Craigslist) solely for that purpose.

Why do I recommend that method? Because you never get another first guitar.

I still have my first guitar that my father bought me when I was 15. I'm 40 now. And the reason the guitar still works properly is because other than replacing things on it that just wore out over time, I was smart enough not to mess with it. Other guitars I've messed with, but not my first one.

My suggestion is to specifically instruct any kid you give this guitar to not to modify it in any way. Don't take off the knobs, don't take out any screws, don't do anything except set up the action (or take it to a guitar store and have a tech do it,) change strings and NOTHING ELSE. That will make the guitar last a long time.

Oh, and one other thing. Again, if it's a first guitar, DON'T let the kid trade it out. Like I said, there's never another first guitar. Keep it.

Is there any other choice besides this bundle?

No. Only Epiphone has the Rocksmith bundle option. Fortunately, it's a good bundle for what it is that isn't missing anything. The bundle is designed to be a no-brainer purchase, so even if you know absolutely nothing about how guitars work, you can still buy with confidence, give it as a gift and not worry about it.

The only thing I would do is something I just mentioned a moment ago. If the kid sticks with the the instrument, it is a good idea to take the guitar to a guitar store for a proper setup, which shouldn't run you more than $25 to $30.

And if you don't want to take your kid into "the danger zone" with all those expensive guitars everywhere in the guitar store to drool over, pick a day to take the guitar to the store while your kid is at school, have the store do the work, then take it back home.