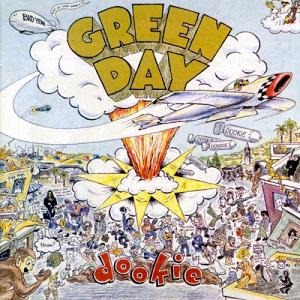 Dookie was released on 1 February 1994, so yes, that means the album is officially 20 years old...

The 1990s for the most part sucked. I know because I lived through it.

From a musician's point of view, there is one very important thing to know about the 90s. It was the last decade of The Old World way of "making it" as a musician.

I'll talk more about that in a moment.

Popular music of the 90s wasn't good. Remember, we're talking about the decade where the most popular music was from Michael Bolton, Wilson Philips, Ace of Base, Celine Dion, Britney Spears and Ricky Martin to name a few.

And oh yeah, the stupid Macarena. That was a 90s thing. A lot of people forget that one. On purpose. 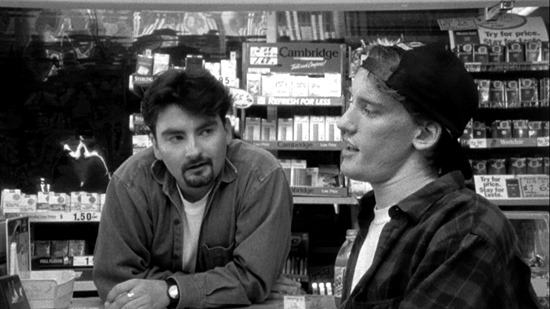 Dante left, Randal right from Clerks.
Half the guys I knew in the 90s looked like this.

To "look garage" for guys, you wore flannel, combined that with ripped jeans, torn-up sneakers or boots, let your hair get greasy, and yeah, that was pretty much it. I distinctly remember people questioning why the look-like-a-bum-who-lives-in-a-garage look was the "in thing" back then. Nobody ever quite found out why. 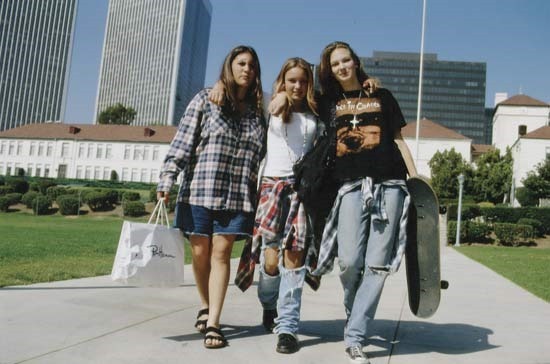 Believe it or not, these are girls.

To "look garage" for girls, it basically meant to look like a girly dude. Instead of the big hair of the 80s, flatten it down to the skull, put some bad coloring in there, don't wear makeup at all, wear "anything denim" to make your ass look like a sofa cushion, and do anything possible to hide every curve you can.

"Looking garage" was basically an excuse for everyone not to care what they looked like at all, and that's why it was embraced so much. It was okay to look like a lazy bum then because it was, strangely enough, a legitimate style.

From the musician's point of view...

The 90s was the last decade of The Old World way of "making it", or trying to. This basically meant you had to get your band together, spend a ton of money getting a CD recorded, spend a ton of money getting those CDs replicated, getting an agent, playing gigs wherever you could and whoring yourself out to any record label that would listen to you in the hopes you would "get signed" and become a paid act.

In the late 90s however, internet killed all that.

People found out about file sharing as a way to get music for free, and did. Nobody wanted to pay for CDs anymore, and didn't.

There are guys who used to be in bands in the 90s that to this day are still bitter about what happened when internet file sharing hit the scene. It's totally understandable, because some bands spent thousands if not tens of thousands on recording and disc duplication, only to end up with boxes of CDs that nobody wanted to buy because they'd rather download it for free off the internet. 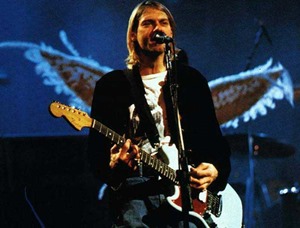 Nobody saw this one coming.

It was in the 90s that a bunch of guitar players developed a sudden interest in vintage Fender guitars. Yes, Fender specifically.

When people saw Kurt Cobain playing his Jaguar or Mustang (or this one with the stripe), most players had never even seen one before. Or if they did, they never paid any mind to it because it was a "dorky" guitar. Well, now all of a sudden it wasn't dorky because Nirvana was on top of the charts.

Other grunge bands brought back huge interest in the Stratocaster. While the Strat never truly died out at any point in time, there was a sudden surge of interest in them because all those grunge dudes broke out their old Strats from the 60s and 70s.

This completely blindsided the guitar companies and stores because all of them were committed to making and selling only the latest and greatest stuff - but now nobody wanted any of it.

Several guitar companies folded because of this, as did many guitar stores. Imagine having $25,000 worth of stock and nobody to sell it to. That happened a lot because many companies and stores just couldn't adapt, and ended up going out of business.

What do I pine for from the 90s, if anything?

I really struggle to think of anything that I miss from the 90s. To me, that decade just seems like a span of time where nothing really significant happened, except for internet of course.

I'm not saying the decade was bad, but more like blah. It was just kinda.. there. And then it was over. Well, not without mass-wide Y2K hysteria right at the end (what a joke that was).

The only thing I can say I truly miss about the 90s is that it was still cheap to live in America during that time. Even though the country was whacked with a recession in the early 90s, gas was still cheap and the cost of living was still relatively affordable even in the tiny Connecticut town I was living in.

I don't particularly remember anyone really complaining about how much things cost in the 90s. The jobs were there, the wages decent and the cost of living was something manageable.

And the real scary part? The younger generation expects us to fix the messes with this country that we didn't even cause.

Well, won't that be an interesting project, eh?

The 90s, while boring and blah for the most part, were at least stable, predictable and you knew what to expect, somewhat. At least that somewhat was better than having no clue what's going on, which is the case today.

Even though the 90s sucked, it's a suck that many wish would come back because boring, plain and stable is a lot easier to deal with than the wild, unpredictable and unstable crapola we deal with now.