driving a dorky car and getting away with it - part 2

Years ago, I wrote driving a dorky car and getting away with it. Six years ago, in fact. I figured it was time for an update on what I think will be future classic cars.

As said in the original article, any car that was made 25 years ago or earlier is considered a vintage. Year 2015 is close enough at this point, and 25 years prior to that was 1990.

What "dorky" cars were made in '90 that could be considered classic vintages now?

Here are my personal picks. 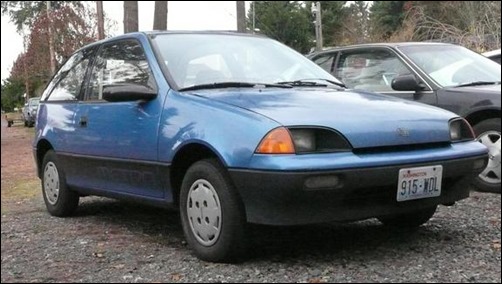 Dorkmobile? Absolutely. But I guarantee you'd love to own one for one simple reason. It gets insanely good gas mileage.

It's interesting the Metro came out when it did, because it was at a time when gas prices were low in the US. However, the car was so cheap that a bunch of people bought them anyway.

The government's rating on this car is 38 MPG city/45 MPG highway. That's underrated. This car can easily achieve 50 MPG highway without a problem.

How does it get such high MPG as a gas-powered car? A very small 3-cylinder engine, combined with it being a subcompact and being ultra-lightweight.

Metros are available for under $2,000 right now. If you're worried about another gas crunch, buy one, sink $1,000 into it for repair/restoration and the car will pay for itself easily in a very short period of time.

The engine in this thing is a Suzuki motor, and if taken care of right, you can pile on a lot of miles easily. Yes, the car is slow, and yes, you'll hear the little motor buzzing like crazy whenever you have to pass someone on the highway. But that high MPG you get is well worth it. In addition, it's built with correct ground clearance, which means that along with its subcompact size means you can park anywhere.

Gas price alone dictates whether the Metro is a dorkmobile or coolmobile. Right now it's a dorkmobile, but as soon as gas prices go up again, you'll be the envy of every other driver on the road.

The #1 thing to put money into with a Metro, other than the mechanical stuff, is the tires. Don't be tempted to put cheap rubber on it. Buy proper all-season radials, and for winter driving, slap on a set of Bridgestone Blizzak non-studded snow tires. You'll get better traction in the Metro than most 4x4 trucks. I'm not kidding. 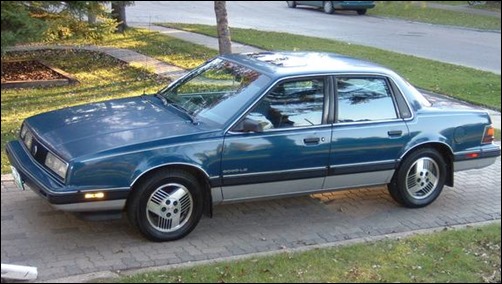 Pontiac is no more, and part of the reason is that almost all their cars were nothing but slightly different designs of other more popular-selling cars in GM's lineup.

The 6000 was only produced from 1982 to 1991, which is why you basically never see one. It's the same thing as a Chevrolet Celebrity of the same year in a Pontiac flavor.

The interior of this car is comfortable, but the gauges are a total throwback to the 1970s with a long, horizontal speedometer - unless you had the digital package.

The weirdest thing about the '90 6000 is the snout. Long horizontal lenses with everything angular, and then a round Pontiac emblem right in the middle. Odd styling at best.

Dorky car, but sorta/kinda stylish in that weird Pontiac way. And no, this car does not get good gas mileage. I'm pretty sure a 3-speed automatic is all you get, meaning no 4th gear overdrive. 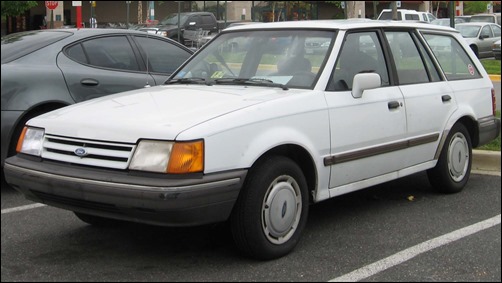 The '90 Escort Wagon is as boring as a bump on a stump, but it does get respectable gas mileage at 23 city/33 highway, but only with the manual transmission. With the automatic, it drops to 23 city/28 highway. However, with light gas pedal action, you could eke out 30 MPG or greater with the auto.

Getting 30+ MPG out of a 5-door wagon is actually pretty darned good, even by today's standards.

The engine is the 1.9 liter 4-cyl, and while slow, the fortunate part is that as long as the engine is maintained, it will burn even the crappiest gas you put into it. However, it's mandatory that if you seek one of these out, purposely buy one with as few options as possible, otherwise you may run into an electrical nightmare. Find one with manual crank-down windows, few options and A/C, fix it up, and she should be a good, small hauler - if you can get past the boring styling both inside and out.

The #1 problem with this car is rust and rot. If seeking one out, check the quarter panels thoroughly and bang them with your fist. If you hear things crumbling when you whack it, walk away because there's rust/rot on the inside. 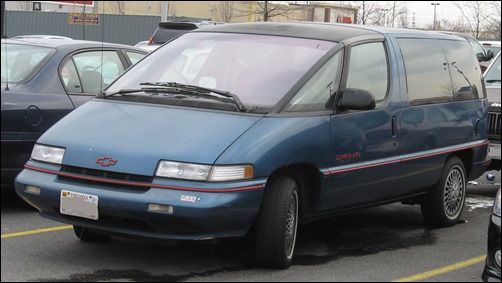 Dear God, this thing is ugly.

The Lumina APV and its sister cars the Pontiac Trans Sport and Oldsmobile Silhouette were made to compete with the leading family hauler of the day, the Dodge Caravan.

I remember when I first saw one of these when it was new. At first, you were really impressed by the styling. But the more you looked at it, the more you hated it and realized it was just a fishbowl on wheels.

The worst part about these minivans is changing the spark plugs. The first 3 are easy. It's the back 3 that suck, because they are a nightmare just to get access to them. Awful, awful and more awful.

Driving the Lumina APV is basically like driving any other minivan. You have a very cushy ride and sit high, allowing you to see more of the road - that is when the sun isn't reflecting off the massive dashboard (GM fixed that later by putting carpeting there.)

The engine is the 3.1 V6, which in this application was so-so at best. It moved the van, but don't try to haul anything overly heavy or tow anything with it.

Would the '90 Lumina APV even be able to move when loaded with 7 full-size adults? It probably would, but really slowly. In '92, the 3800 series V6 was offered as an option with a better 170 horses and more torque.

Gas mileage on this thing is almost as bad as a 4x4 full size pickup. 16 city/21 highway. Yeah, it's that awful. When you have that much glass and steel going on, even in a minivan, it's a heavy beast and quite the gas chugger.

However, there is one very important thing to note about the Lumina APV. Nobody will steal it. Ever. You could probably leave this unlocked in a mall parking garage unattended with the engine running and nobody would take it. 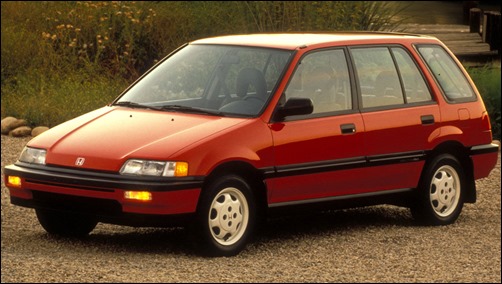 Everyone loves Honda Civics - except this one because of the seriously ugly rear hatch treatment combined with the dorky wheels that gives it almost a clown car look.

There are 2 versions of this car. The front-wheel drive and the 4WD, and I'm not sure if it's a "true" four-wheel-drive or an all-wheel-drive setup.

The 4WD gets pathetic gas mileage at just 21 city/24 highway. For a compact wagon, that's really bad because it's barely better than what a compact 4x4 pickup can achieve for MPG.

The 2WD on the other hand gets 27 city/31 highway. Not as good as the non-wagon Civic, but the wagon has a lot more steel to it and a heavy hatch door in the rear. For a small wagon in general, this is the kind of MPG you would expect even today.

Are there any problems with this car? Just one, and it has nothing to do with the car itself.

The '90 Civic Wagon unfortunately suffers from kids and morons that try to modify this car into something it was never meant to to be. They see "Honda Civic" and think they can change it into something to race, hack it up, fail miserably, break the car somehow they try to sell it off to some poor sap who won't check for stress cracks.

If you can find one that has not been modified in any way and not had the engine beat the crap out of, about $500 to $1,500 worth of minor restoration and mechanical fix-ups can have it running as right as rain, ready for another 100,000 miles - even with 100,000 miles already on the clock. 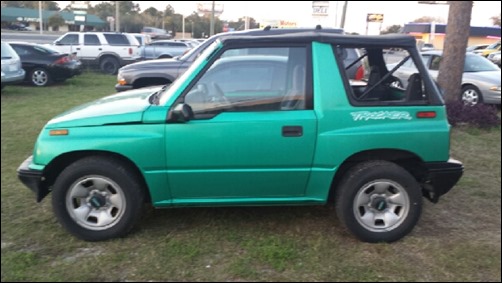 We'll end this with another Geo, this time the Tracker, also known as the Suzuki Sidekick.

My late father owned two of these, both ragtops, so I can speak of driving one of these from personal experience.

A ragtop is loud when driving, and the '90 Tracker is no exception to that. You hear a ton of road noise when driving this thing. However, the rest of the car more than makes up for that, for several reasons.

First, the engine, if it was properly maintained, is basically bulletproof. Just a simple 1.6 liter 4-cylinder motor.

Second, most of these are 4x4s. Try to find a 4x4 that gets 23 city/26 highway (manual trans). Not an easy task. The Tracker amazingly gets good MPG even with a real-deal 4x4 transfer case underneath (it is "true" 4x4 and not AWD.)

Third, the front of the ragtop flips back, offering one seriously good open-air top. The opening is ginormous because the whole top of the roof goes back. Two clips, pull back, tie down with a built-in strap, and off you go.

Fourth, you would be amazed how much front passenger room is in this thing. You'll also be amazed at how big it feels on the inside for such a small car.

Fifth, the highway road manners of a Tracker are a million times better than a Jeep Wrangler, mainly due to the nose being much more aerodynamic.

Other than the loudness in the ragtop version, I have two other complaints.

The interior look is awful. Gobs and gobs of plastic everywhere that's gray, gray and more gray with the exception of the center stack which is black. All Trackers as far as I know have this gray-gray-gray treatment. And the center stack plastic feels real cheap too.

The zipper that closes the rear flap on the ragtop needs routine lubrication, or it will freeze right up from exterior gunk. It is covered, but that doesn't help much. If when hunting one of these down you notice that the rear flap absolutely will not open, don't even bother trying because it's better just to get a whole new top.

Fortunately, a new ragtop for a Tracker/Sidekick is under $200, so it's not like you'll spend a bunch of cash on it.

In other words, if you see a Tracker/Sidekick with a wrecked top but the rest of the car looks fine, isn't rusted/rotted out, is mechanically sound and runs/drive fine, grab it. Just make sure the interior clips that hold the top down are in good shape.

Small note: There's a myth that Trackers flip over easily. Not true. Not at all. If kept in stock form (meaning not lifted,) it sits squat and has plenty of width along with a proper suspension to prevent rollover. I've taken a few hard turns in Trackers, and believe me, it takes a lot to roll one over.

Other than getting a top for this car, the thing to spend money on are tires that promote a quiet ride, because if you don't, you will hear an insane amount of road noise and it will bother you.