driving a dorky car and getting away with it

The unofficial-yet-somewhat-official rule of whether a car is deemed to be "vintage" or not is if it's at least 25 years old.

My Buick, for example, is 33 years old. So it definitely qualifies. It's a 17-and-a-half foot long beast. They definitely don't make 'em like that anymore. Incidentally the pace car was made right before several cars started getting ginormous graphics on them, like say.. oh I dunno.. the Pontiac "screaming chicken" on the hood of a '78 Trans Am. Cheesy? Yes. Cars were weird in the mid-to-late 70s, what can I say.

The strange thing about older cars is that anything made at least 25 years ago is cool now. This is a universal truth.

My Buick is a great example of this. Nobody wanted it in '75. Dealers and owners removed the stripes on purpose because they thought that it looked bad. Oh how wrong they were. 🙂

But even if you don't own something as striking as the '75 Buick, any car that's of-age does in fact have cool factor to it today - especially if it's tacky. The more tacky the better.

Here's a few examples of what I'm talking about:

The Ford Fairmont (a.k.a. Mercury Zephyr). Disgustingly plain. Pathetically slow. As boxy as boxy could get. This car is as exciting as a bowl of oatmeal.

The only people I knew who drove this thing were old ladies. They would putt-putt around in it, get some groceries, go to church and not do much else.

The Fairmont is part of the reason some car guys hate the early 80s so much because there was absolutely nothing about this car that was good other than the fact it was plain-jane transportation and not much else.

The Chevrolet Citation. This car is only slightly more exciting than the Fairmont but not by much. Everyone I knew who ever own a S--tation would beat the ever-lovin' snot out of it. They'd pull donuts, smash into curbs, etc. If one was fortunate (heh) enough to get one with the 2.8 V6 in it, it at least had some grunt under the hood. Actually I can't call it "grunt". More like a whimper.

Most people (myself included) considered the Citation a "big Chevette", meaning it was just as crappy as the Chevette except larger.

Yeah you knew an early-80s cheesy-car list couldn't be done without mentioning the Dodge Aries (a.k.a. Plymouth Reliant). Now I will admit, this is the car that "saved Chrysler". It was introduced at the right place at the right time - but this still doesn't take away from the fact it's cheesy. And yes it is cheesy. Even K-Car owners admit that. But it's a "lovable cheese" type of thing and that's why they love their cars.

Like the Fairmont, this is a grandma car. It's agonizingly slow. Everything that could go wrong with it did. It was a horrible, horrible car. But believe it or not, yes, there is a car club for this jalopy and it's called The Chrysler K-Car Club.

The K-Car Club just goes to prove that any car over 25 years old will have a following. Possibly a large one.

It also goes to prove that any car you acquire that's of-age is indeed considered vintage.

To any people that follow me because of my '75 Buick pace car replica: If you can't get one of your own, don't worry about it because the plain fact of the matter is that any Buick from that time period is now a collector's item. From Centurys to Regals to Skylarks to Apollos to Rivieras and the like - all of them have a following. 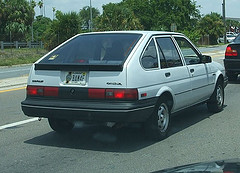 Where to find a good old ride? Florida.

Pictured right: A mid/late-80s Chevy Nova. I snapped that pic in 2007. The car is in mint condition and looks like it rolled right off the showroom floor. Couldn't believe it when I saw it. I mean, heck, even the tail light lenses were crystal clear.

Is this a notable car? Hardly. But the fact that something that old looked that good impressed me. I loved the fact it was 100% original.

Florida is a place where you can find vintage rides in spectacular condition because they haven't been subject to the ravages of winter. Other states that would follow suit are a few areas in Texas, most of California and Arizona.

Here's some of the cars I believe have a good cheese-factor to them that will be future classics due to their cheesiness:

Oldsmobile Alero. I owned one of these (a 2000 model year) and it was one of the worst cars I ever owned. It is well known to be nothing but a huge money pit. This car had "FAIL" written all over it from the moment it was introduced. The sad thing is that the car looks awesome, but underneath that sexy steel was nothing but problems - and a lot of them. However I will say that when this car is running right (which is rare), she's a joy to drive. It's one of the very few front-drive cars that "feels right".

Chevrolet Beretta. The design of this car still holds up to this day and in fact is already considered a classic in some circles. However, this car does have cheese factor to it, with the most obvious being those stupid vertical-mounted door handles. I have no idea who thought mounting door handles sideways was a good idea, but Chevy thought it was cool and different. It was neither. Rather it was very annoying. The interior of this car was as good as you could get for the 1990s, which it to say it wasn't good. Cheap plastics everywhere, barely-average fabrics on the seats, etc. In 1990 the Beretta was the Indy 500 pace car. Road-reflector yellow with pink (yes, pink) "INDY" on the side. Stylin' to be sure.

Chevrolet Lumina Z34. This was the sporty version of the otherwise plain-jane Lumina family car. Like the Beretta it suffered from vertical-mounted door handles and tacky interior treatment, but this car actually is quite quick as it houses a 3.4 V6 pushing out 210 horses with 215 lb-ft of torque. This is a front-drive car where you have to grab the steering wheel with both hands if you stomp the gas to the floor - count on it. I call this one "sleeper cheese".

Late 90s Ford Taurus. This was the "roundest" Taurus ever made. Everything was roundy roundy roundy on this car. Headlights, rear glass, stereo.. everything. It was so round that it was just ridiculous. People hated this and wanted it to go back to square (which Ford eventually did do).

Typical to all Taurus models, the best way to describe the driving characteristic of it is "sober" (unless a SHO model). This car got you where you wanted to go and usually did so with little complaint in very ho-hum fashion as it was designed to do. This car was also a staple of rental fleets everywhere.

I think the best description I ever heard about this car was hearing a friend say that it has a "dumpy ass" (in reference to the rear of the car). I couldn't disagree.

Dodge Neon. With its ever-present fogging headlight lenses, the Neon was like a rash that absolutely would not go away in the 90s. But strangely enough the moment production ceased in '05 it vanished from the streets. Rarely have I seen an end-of-production car disappear from the highways as quick as the Neon did.

There's actually a scoring system per sé concerning this car. If you own one made between 1994 and 1998, that is a Chrysler produced car. However if you own from made from the tail end of '98 to '05, that's a DaimlerChrysler produced car. So for those stuck on little details like that, the more desirable is the one made pre-Daimler. Why? Because it's more cheesy.

What's dorky now will not be dorky in the future

Any car that you think sucks right now won't suck given two-and-a-half decades from now.

Consider that if you saw a pristine condition 1982 Chevrolet Cavalier today, you'd do a double-take on the car. First you'd be amazed just seeing one and then want to get closer just to look at it.

But you never would have thought that in '82, right?

Vintage guitar of the week #4 - 1974 Fender Stratocaster Natural
What Fender did to save a buck in the '70s ended up with a Strat that has a unique look to it.

How to make an animated GIF from a movie clip the free and easy way
GIFs are cool. I pronounce it with a hard 'g'.