Everything you ever wanted to know about guitar loopers 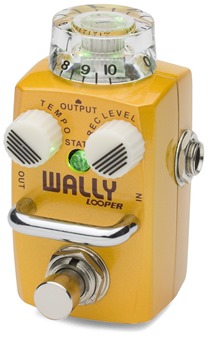 Above is a pedal I'm considering buying, the Hotone Wally Compact Looper. The Wally basically does everything the Ditto does for significantly less. And it looks cooler.

What does a looper pedal do?

A looper is a digital sampler that records a sample and then loops it.

Technically, a delay pedal does the same thing. And in fact, some delay pedals do double-duty as basic loopers like the DigiTech HardWire DL-8 where you can set "infinite repeats", which for all intents and purposes is looping.

Some loopers are basic while others are really advanced.

Basic loopers are the Wally and the Ditto. What they do is allow you to record a sample, then overdub "on top of" that sample as many times as you want and loop it.

What makes basic loopers basic is that it can only store one loop (meaning once you record a different loop, the original is erased), it has no USB for external storage, no option to save your loops for retrieval later and no daisy-chain "multitrack" capability.

The advanced looper is, said honestly, not easy to figure out because it's a rather techy piece of equipment.

Two looper pedals that are seriously techy and powerful are the Boss RC-3 Loop Station and the DigiTech JamMan Solo XT.

Both those pedals are very advanced in the way they do looping. Not only do they loop, but they also have a built-in simple drum machine, the ability to store loops and retrieve them later, transport sound files from the pedal to PC or laptop via USB, a massive internal memory (the Boss pedal can store up to three hours of audio), follow-along metronome light, tempo settings, etc.

Like I said, these pedals are really techy things.

DigiTech's "JamSync" technology takes it a step further and allows separate JamMan pedals to connect to each other in a pseudo-multitrack environment. Very cool that you can do that - if you can figure it all out...

...and therein lies the problem with advanced looper pedals. They are complicated. And there is no way to make them uncomplicated.

If you want a "just works" easy looper that you can figure out in less than 5 minutes, you want a Wally or a Ditto.

If you want something that has advanced features, or at bare minimum has the ability to save separate loops to retrieve later, grab an advanced looper pedal.

The best feature of the advanced looper is its ability to store and retrieve loops, no question about it. Also, it is very unlikely you will use every feature of an advanced looper since it's so technical in the way it works. But the ability to store/retrieve is worth paying for if you want a really, really fast way to capture riffs right in the pedal with no fuss at all.

Is a looper a good guitar teaching tool?

A looper is arguably one of the best guitar teaching tools you could have, because in order to use it right, you are forced to learn rhythm playing.

Why do I want a looper?

My reason for wanting one is for songwriting purposes. As fast as I can come up with a riff, I can put it into the looper, play along with it and create a song quickly that way.

Yes, my R8 does have sampler/looper capability and I know how to use it. But it's not as fast or easy as a looper pedal is, hence the reason I want one.

Why do I specifically want the Wally looper? It's the best-priced proper looper for the money. The Ditto, while great, is overpriced, and doesn't even have a tempo feature like the Wally does. The Wally is not only best-priced but best-bang-for-your-buck. You can't do any better than a Wally for a good, basic looper.