Not bad for what it is, but a little on the plain side.

So I'm at the guitar store and I see a Fender Standard Jazzmaster HH, black-on-black, just like in the photo above, so I tried it out, and this is what I thought of it.

Hidden feature I did not know about until later: It has a push/pull to split the humbuckers to outer-coil single mode. I never even thought to look for this on a Jazzmaster because this style of guitar never has a push/pull. The Standard HH does.

What I can comment about is the humbucker tone. Good? Yes. Jazzmaster-like? Also a yes, but obviously doesn't have the voicing that the big Jazzmaster singles usually have - nor did I expect it to.

It's Mexico made (not a bad thing) and the same price as a Mexico Standard Stratocaster, meaning you don't pay too much for it. Very good.

The neck is the best part of this guitar. Smooth satin urethane finish on the back, right-size frets (medium jumbo,) and a proper 21 frets because 22 on this guitar would be seriously dopey.

As far as Jazzmaster guitars go, this is the "most civilized" I've ever played. Anyone could pick up and play this axe easily. If the traditional Jazzmaster is too much for you, yes, you'd like this one.

The outer coil of each humbucker has a shiny covering that is chrome-like and not white that looks tacky and cheap. Fender should have just went with a cream or off-white cover for the outer coil, zebra pickup style. But they didn't. That was a mistake.

This is one of those Jazzmaster vibrato systems where the vibrato plate was moved forward. While the end result is far less string ring, I personally don't like it. This is part of what makes this Jazzmaster "more civilized," as mentioned above. But I consider it a con and not a pro.

My last complaint has everything to do with the styling of this guitar. It looks plain. Really plain. The headstock does not have the traditional Jazzmaster "swish trails," the sealed tuners while good and functional have far less pizazz compared to the vintage-style slotted style, and as I noted, the chrome-like outer coil covers just look tacky.

Well-made, solid, sounds good, not overpriced... but has very little wow-factor to it because it looks so plain.

There is, however, a very easy way to spruce up the look of this Jazzmaster.

Get the one in a Ghost Silver finish. It doesn't cost any extra. 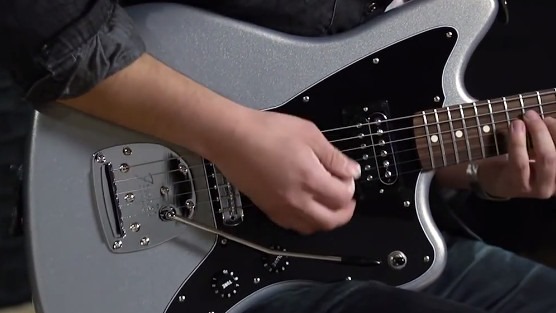 That particular finish has metal flake in it with some sparkle going on, making the shiny chrome-like outer coil covers work a whole lot better, appearance-wise. Of three 3 finish options (Black, Olympic White, Ghost Silver,) if you like this guitar, specifically get the Ghost Silver finish. If I were getting this guitar for myself personally, that's the one I'd go for.