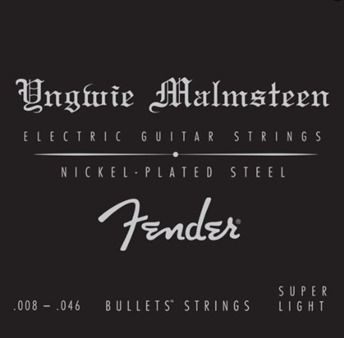 No, the above is not a joke. Fender really did release a set of "signature" electric guitar strings.

Is this one of the dumbest things they've ever done?

Let's talk about that.

I'm on YouTube, and I thought I'd go visit Fender's channel since I hadn't been there in a while; I found this video, released 14 May 2014, which at the time I write this is 42 days ago, so it's not old.

The video has ratings and comments disabled (which is not the first time Fender has done that with a Malmsteen video on their YouTube channel), and that immediately said to me, "Uh-oh.. this can't be good."

My instinct was right.

However, this is the first time I've seen Fender totally jump the shark when it comes to artist signature stuff. But maybe that's on purpose. I'll talk more about that in a moment.

Now you know, you know the marketing and PR people at Fender were up to something with this. What, exactly? Keep reading.

But as much as people hate the guy, his artist signature Stratocaster guitar is a good seller. If it weren't, Fender wouldn't still be making it.

I think what Fender is doing here is testing the limits to see how cheap they can go with "signature" before players stop buying. With a Malmsteen product line, Fender has almost nothing to lose because the internet already hates the guy to begin with. Only the most dedicated of fans would even consider buying stuff with his name on it.

If signature Malmsteen strings (which are basically nothing but Super Bullets in a weird gauge set and a black package), cables, bags, headstock tuners and the other kitschy stuff actually sell... well, that just opens up a whole new way for Fender to make money.

Anything classified as an "accessory" is something Fender doesn't have to make. They can simply license use of their logo, have someone else make the whatever-it-is, sell the product, Fender collects the checks and laughs all the way to the bank.

On a final note, the dumbest thing Fender "makes" right now is foam ear plugs that sell for 5 bucks, and you only get 8 of them. I can get 50 of them for just 5 bucks more. And yes, THEY ARE THE EXACT SAME THING, just without the Fender branding.