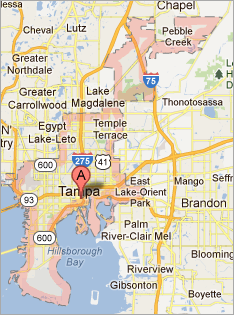 Most people know I'm a road geek, and this is another one of those type of bloggos.

Google Maps has this thing now where they clearly show the borders of towns on a map search, so I was finally able to see exactly where the borders of Tampa lie. I've written about this stuff before, but now I can show better pictures of what I mean.

On right, the pink outline is the border for Tampa, and where things really get confusing is the difference between Tampa and New Tampa, because it has everything to do with an annex that occurred in the late 1980s.

Right above Temple Terrace is where the annex that happened in 1988 starts. The lower portion is the old traditional Tampa border, but above that is the new area. New Tampa is defined as "an area in Florida that encompasses both a 24-square-mile (62 km2) area within the corporate limits of the City of Tampa, as well as a larger land area that is in unincorporated Hillsborough, but retains a Tampa mailing address". So does this mean it's both unincorporated and incorporated at the same time? Yes. Confused? I thought so. Don't worry, because nobody understands it.

New Tampa for the most is awful and I avoid it when I can because the roads do not accommodate for the traffic. The traffic is what it is because nobody expected the population to explode in such a short period of time. Even with the road upgrades under construction right now, it's only a temporary solution and the area will go right back to being a mess in less than 15 years, which I'll get back to in a moment.

The area in general wasn't designed well because everything is centered around two major thoroughfares, CR 581 and I-75. That's it. Now you may think that would be just fine for a 24 square mile area, but it isn't. CR 581, by design mind you, holds all the major businesses and the sole I-75 ramp number that you enter or exit from is 270. Everything major that happens in New Tampa only happens in one spot with no way out with any kind of speed other than I-75 or CR 581.

If you thought while driving around there something to the effect of, "There must be a side road out of here somewhere instead of the two major thoroughfares, right?" Wrong. The only road that comes close is Cross Creek Blvd, and that's a piece of crap because it gets slammed with traffic just like the other two do, except slower and you're required to take CR 581 through New Tampa just to get to it.

The only feasible future option is to build a 3rd thoroughfare. If it came to exist, it would connect CR 581 to I-275, and it would work. Where it would happen specifically is right along this "trench":

That big breaking line in the land you see from left to right are power towers and lines. When you zoom in close, you can see them better: 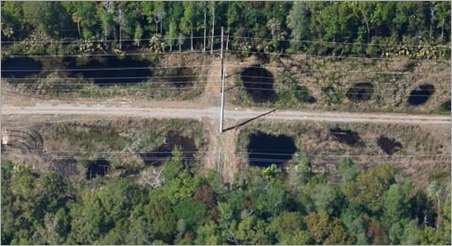 All of that land is New Tampa, so there's no issue when it comes to hashing out details between townships since we're only dealing with one, Tampa.

Yes, there's a dirt service road there, but you can't use it for two reasons. First, the CR 581 side is protected by a gate, and second, the other side is a dead end - but it ends just mere yards away from I-275.

This is the CR 581 east side (note the dirt road that starts at left):

What a tease this is. The road is already right there and just needs pavement plopped down and made into a simple two-lane 40MPH throughway running right alongside the towers, and it would alleviate a ton of congestion in the area.

An added I-275 ramp would have to be constructed to get to it from the west side. If that came to exist, it would be I-275 exit 54 or 55 depending on mile marker, and could be made to cover both north and south entrances and exits to the interstate.

I'll give you another reason why it makes complete sense to have that road exist. Being all the major businesses are lined along CR 581 by design, wouldn't it make sense for all of them to have the option of freight being delivered from I-275 as a third option instead of only CR 581 or I-75? It sure would.

If you're thinking, "What about noise pollution and the exhaust from the diesel trucks?", that's really a non-issue at best because the road would be far enough away from the very few houses lined along where that trench is at present. Where there's noise, you do what other states do and put up noise wall barriers, which work wonders. Also, I seriously doubt having trucks running through there would displace any wildlife or damage any nature because the ground has been flattened already and is nothing but dirt. In other words, there's nothing to save, so it's safe to build on.

I also didn't see any wildlife-specific things built on the towers. No bird nest platforms present or anything else like that, so none of that area is part of any nature preserve that I know of.

As it exists right now, New Tampa is overrun with traffic and it's only getting worse. In the mid-2000s it was tolerable because it wasn't that bad, but now with the explosion of population it's a nightmare. That's the price of success.

It's like I said, after the widening and reconstruction of CR 581 is done, that's only a temporary solution that at most will last 15 years, then go right back to being a jammed mess again. That 3rd thoroughfare I mentioned by converting that service road into being an access point to I-275 is a workable solution that will pay for itself easily in a very short amount of time. And by short I mean less than 10 years.

The road is already there, the premise is sound, and I can't see the end result being anything but positive.