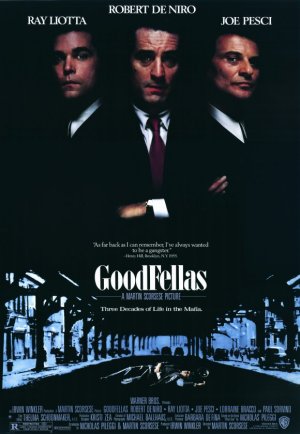 Time to take a small break from my music posts.

I could probably list a thousand reasons why Goodfellas is one of the best movies ever made. The perfect character development. The flawless pacing. The masterful editing. I could probably prattle on for hours about this flick.

What makes Goodfellas near-perfect however is the one thing that makes for a good movie over everything else - you get completely immersed in the movie and feel a connection from beginning to end. When watching this film, you really feel like you're living Henry Hill's life.

Director Martin Scorcese is the magic behind this movie. The man simply has the director's eye and knows how to use it. I find myself saying, "Wow, what a cool shot that was" many, many times during this film without losing track of anything that's going on. All of that is of course is what the director wanted you to see. It's like the guy simply knows exactly what you as the viewer would want to train your eye on at any given point of the story. There is no shot that's too long, too short, has the wrong color, or anything like that. The whole thing just plain works.

As for the pacing, it's just flawless as I said above. You are told exactly what you need to be told to move things along and nothing you don't. The speed of which things transition feels completely natural. When things slow down, it feels right. When things speed up, it also feels right. During scenes with voiceovers, you totally feel like you're in the mind of the person you're hearing. I mean, we're talking The Shawshank Redemption style of pacing here. It's that good.

Goodfellas easily makes my top 10 favorite movies of all time. Probably in the top 5 if I really think about it. You've probably already seen it at least twice. See it again.