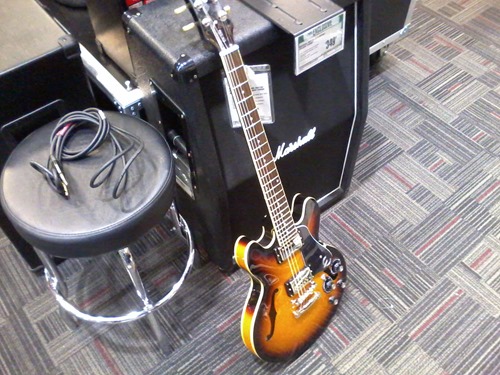 While at the Guitar Center last week, I tried out an Epiphone ES-339.

Now if you've been reading my blog at all, you know I think this is the best value guitar of 2015. Does it live up to the hype I gave it?

Looks even better in person than I thought

I said before that this guitar has sex appeal, and wow does it ever. The sunburst finish on this guitar is spot-on correct. The burst is correct, the hue is correct, it's all correct.

Smaller than I thought - but not in a bad way

In other words, it's a super-comfortable player.

I don't like using words like "smooth" to describe a sound, but there's really no other word that can describe ES tone. It's a sound that's not supposed to have the treble attack of a Strat or a Tele, nor is it supposed to blare in volume like a Les Paul would.

All I can say is that yes, it has the smooth tone of a proper ES.

Neck and frets are a just-right size

Thankfully, the Epiphone ES-339 has a modern neck feel to it. If it were true-to-vintage spec, it would buzz all over the place. No buzzing in this ES.

Now granted, I prefer Fender/Squier neck sizing over Gibson/Epiphone, however if I owned this guitar, yes I would feel totally comfortable with it. And I'm sure many other players would feel right at home with it also.

Weight is just-right for me

The ES-339 is a semi-hollow body, so it's light, but surprisingly not too light like I thought it would be. It has a nice weight to it to make stand-up play very comfortable.

However, there may be some who wish it had an extra half-a-pound to it. Personally, I think the weight is just fine as-is.

Epiphone reports the weight at an average of 7.2 pounds. That's a few tenths less than your average Strat weight.

Great alternative for those that want something that's not a Stratocaster, Telecaster or Les Paul that has loads of class to it

The ES-339 is a sexy guitar with sexy tones to match. There's not a bad piece of hardware anywhere on the guitar and it requires no upgrades whatsoever. It is a "set up in USA" guitar prior to being sold, so it's pretty much out-of-the-box perfect with only very minor adjustments necessary.

Will the 339 woo me away from my Jazzmaster? No. But I may consider picking one up in the future. This is one of the modern greats from Epiphone, no question about it.

I sometimes wish Epiphone built nothing but semi-hollow and hollow-body guitars, because they do it so well, even for Asian builds. Great stuff. Truly.