Guitar gear made in China is not junk anymore 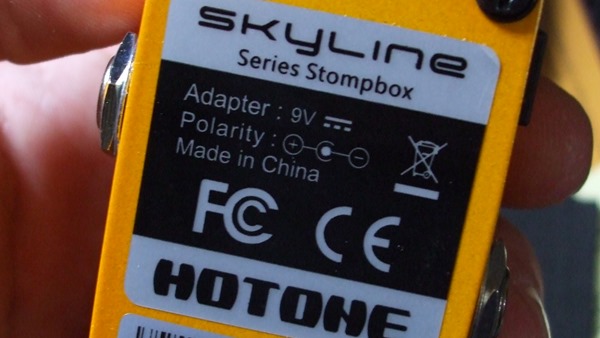 In the guitar world, Americans think that anything made in China is junk.

Let's rewind the clock back to the early 1990s for a moment.

I remember, quite clearly, when guitar guys thought anything made in Korea was junk. Nobody would touch that stuff and considered it all garbage. But now? Korean made guitars are now considered high-end stuff.

So what changed? Two things. Build processes and attitudes, in that order.

Korean-made electric guitars used to be junk. Guitar players complained like crazy that nothing made in Korea was any good. Korea listened, improved their manufacturing processes, and now make many of the best guitars in the world.

China at this point has turned the corner and now produces some seriously good, high-end stuff for both guitars and guitar gear as well.

The Hotone Skyline Series Wally Looper pictured above, a pedal I just bought, is made in China. It's probably true that every single component of that pedal was made exclusively in that country. Does that make the pedal junk? Not in the slightest. The Wally Looper looks high-end, feels high-end and performs high-end, yet keeps the price down because China knows how to streamline manufacturing processes.

Did you know every Fender "Modern Player" series guitar and several other models are made in China? It's true. And they're very well-made guitars. The Starcaster guitar pictured above is one of them.

If the fact those guitars made in China prevents you from trying one, you're an idiot that's missing out on an otherwise great guitar.

In the end, it's all about the build processes. Since around 2012, China has consistently delivered genuinely good, quality guitars and guitar gear.

Now this is not to say that China doesn't still make cheap stuff, because of course they do. But when you pay a little extra, such as for the Starcaster guitar above, what you get will be a seriously good instrument...

...and the same can be said for China-made guitar pedals, mixer boards, microphones, amplifiers and so on.

It's guitar player attitudes that haven't changed just yet, because it takes time for that to happen. With Korean-made stuff, it took players about 10 years to come around before they finally realized Korea makes good stuff. With China, not enough time has passed to convince the guitar player masses that China makes good stuff - even though it's well known that they do.

My advice? Try a China-made Fender branded guitar. If you like it, buy it now while it's still cheap, because the only thing keeping the cost down is where it's made and not how it's made.