i haven't used a textured pick in months 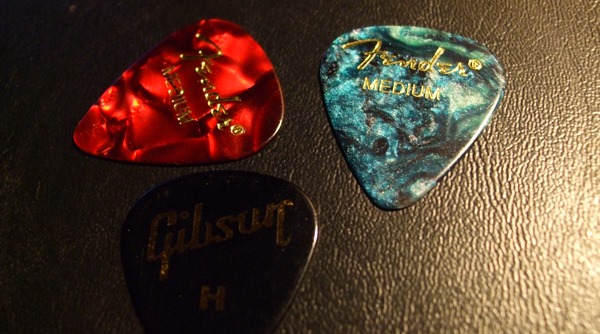 I've been using Gibson Standard Heavies for a while now, but recently I dug into my pick tin and grabbed a Fender 351 celluloid Medium and started using that again. I forgot how cool using that pick was.

And while out and about recently I decided to pick up a 12-pack of some more Fender 351 picks, this time in ocean color since the local Guitar Center had them in stock. It was either go with ocean or a more green-colored one. I wanted something different, the green and ocean were the two I liked since I already had some red ones, and ocean won out.

Does the color of a pick make you play different? For me it does. There are times when I glance at my picking hand and see the ritzy look of the Fender 351 and yes, it does in fact give me a good feeling.

I'll put it this way. A Fender Premium 351 Celluloid pick is the absolute cheapest way to get a genuine Made-in-U.S.A. Fender product. So even if you don't own an American Stratocaster or Telecaster, you can always get the U.S.A. picks for cheap. That, and Fender without question has the best-looking guitar picks. You see one, you get a little "wow" factor from it because Fender knows how to do image very well.

And even with my Gibson picks, those have "wow" factor as well, because even though they're black, the Gibson logo is metallic gold. There's a little extra added panache in the respect that most guitar stores don't carry Gibson Standard picks, so if you have them, other players will notice just because they're not available in every guitar store.

I thought about something when I picked up the Medium 351 again. I haven't used a textured pick in months. Several months, in fact. There was a time when I was a "Pitch Black Tortex .88 'til I die" type of player, but for a good long while I've been using nothing but texture-free celluloids.

Ultimately, I find that the flappy nature of celluloids brings out Strat tone better no matter what Strat it is be it Fender, Squier or any other kind of Strat. Granted, I do get more clack when using celluloids, but the sound I get with them more than makes up for that.

Picks made of delrin like the Dunlop Tortex are great, but instead of flappy/clacky noise you get scrape because of the delrin texture. For rock and metal that's great. But for everything else it sucks. When you really want strings to "ping", you need picks with flap and clack, and nothing does that better than celluloids. Thinner ones specifically, like the Medium and the Thin from Fender.

An easy way to get inspired when you get bored playing guitar (which does happen from time to time) is just to switch picks. I purposely have a variety in my pick tin just for that reason, because sometimes just picking up a different piece of plastic makes all the difference.