If you're not using a capo on your guitar, you're missing out 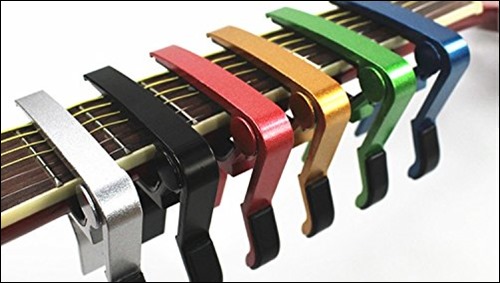 There are a lot of guitar players who firmly believe you should not use a capo. Ever. Why? Because they think it's "cheating," which is one of the dumbest things I've ever heard.

According to certain guitar snobs, any use of a capo is failure because they feel if you want to achieve certain chords that you literally cannot fret with your hand, you should alternate your tuning. Yes, they say you should spend about, oh, five to ten minutes completely retuning your guitar, then go ahead and play that chord you wanted to. Total waste of time. Use the capo. Mounts in seconds and you get the chord you want a whole lot faster.

Some snobs will even recommend buying separate guitars just for alternate tunings. Waste of money. You already have a guitar, and it already plays and sounds just fine, yet the snob just outright tells you to go out and spend hundreds of dollars on another guitar just to do something a cheap capo can do in seconds.

When you get bored with guitar, slap on a capo and watch the magic happen

You can't really play Can You Tell Me How to Get to Sesame Street? without a capo:

I'm sure there are players who have figured out a way to play that theme song without a capo. I didn't. I used the capo because it's a lot easier to just play the song using one. If I didn't, the song would be in the key of A and not C like it's supposed to be.

You don't have to play complicated stuff with a capo. Play whatever you want. You'll notice your guitar will sound totally different when you put a capo on.