Is Sarod picking worth learning to pick fast? 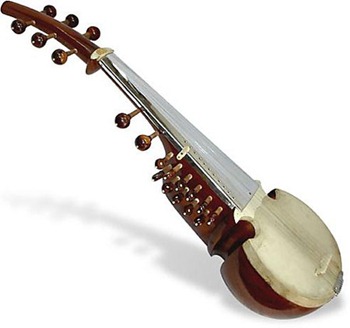 For some guitar players, picking as fast as possible with the most accuracy (meaning as little missed notes as possible) is important. And when you talk about fast picking, one technique is called sarod picking.

A sarod is an instrument (seen above) used mainly in Indian classical music, and it's arguably the second-most-known stringed instrument in that genre of music next to the sitar.

The most famous electric guitar rock player you know who uses sarod picking is Eddie Van Halen. When you watch him pick fast, you will see him doing it.

Before I tell you how sarod picking is actually done, there's a few things you should know about it.

1. You cannot (traditionally) mute with the picking hand when sarod picking.

When sarod picking, your hand is "floating" above the strings so there is no opportunity to mute, and the reason for that is that the swinging motion of this picking style doesn't really permit it. You'll understand what I mean by that in a moment when I explain how to sarod pick below.

2. Sarod picking is all about the wrist.

Very little of your forearm or anywhere beyond that is used when picking this way; it is a very different style compared to what you're used to. Should you decide to try this picking technique, your wrist in the beginning is going to get one heck of a workout.

3. You absolutely cannot learn fast sarod picking in a day no matter what your skill level is.

For most electric guitar players, learning to sarod pick is like learning how to play the guitar all over again. Some of you on attempt to learn this may get so frustrated with it that you won't bother. But if you do learn how to do it, you can pick insanely fast and for a very long time once you get the motion right.

How do you sarod pick?

Fill up a glass of water. Take a spoon, start stirring the water, and watch your wrist while doing it. Notice how you're not using your forearm at all to stir that water. Now you understand the stirring motion.

On the guitar, take your pick, arch your wrist above the strings just as if you were going to stir water like you did a moment ago. You'll notice that the way you hold your pick will be angled instead of flat like you normally have it. Start picking in that circular stirring motion. Now you're sarod picking.

You are technically tremolo picking ("up-and-down" picking), but with sarod you've got the circular stirring motion going on in addition to that.

While you're doing this, you'll understand fully why I said this is like learning how to pick all over again; it's totally different than how you normally pick.

You also now understand why I said it's very difficult to mute with the picking hand while sarod picking, because if you try to mute, it's far more difficult to keep that stirring motion going.

Why is sarod picking good for playing fast?

Once you get your stirring motion up to speed, it is the most effortless way to tremolo-pick very quickly. Your wrist basically never gets tired because the circular stirring motion "throws the weight" continually. Much less exertion is needed to sarod pick compared to other tremolo-picking methods.

How long does it take to start sarod picking fast?

It takes a while. Like I said, it's like learning picking all over again, and it can be frustrating to learn it. But once you've got it, you'll be able to fast-pick very easily.

Do I sarod pick?

Rarely. I will somewhat-sarod pick chords on the low end of the fingerboard when playing Spanish-style guitar.

At times I will sarod pick on the upper frets, but not that often because I lean more towards hammer-ons and pull-offs for speedy notes.

On a final note, no two people sarod pick the same, because it greatly depends on your arm and finger length. So when you watch Eddie Van Halen do it, your way of sarod picking will not be the same, as it will be custom to you. In other words, don't take the way he picks as the exact way you should do it. Develop your own way of sarod picking and it will work out much better for you.