I've found over the years that I've very particular when it comes to digital desktop clocks. I own a few of my father's clocks now, two of which I like a lot, both made by Micronta.

Micronta brand clocks were made for and sold at Radio Shack. The reason my father had so many of them is because he worked there and was always able to get the employee discount. However I must say that Micronta is the only clock company that does button arrays right, as in Snooze / Hour / Minute / Time / Alarm / Alarm on/off toggle. All Micronta clocks at one point were like that and it's something you get used to.

The first one I know for a fact is not easy to find today - a large-display digital. This is the one I keep on my computer desk under the 2nd monitor. I have a quarter next to it so you can get an idea of how large the digits are.

What makes this so rare is that it's a triangle-shaped clock. I punched up the brightness so you can see it better. 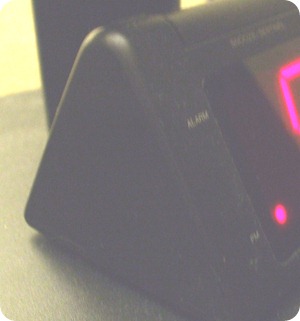 How cool is that?

The catalog number is 63-763. If the above is the only instance you've ever seen of it, don't be surprised because this is an impossible clock to find.

I'm not saying it's impossible to find a large-display digital, but to find one in a desktop form that's triangle-shaped by Micronta? Yeah, good luck with that. 🙂

On my nightstand I have a smaller normal-sized clock. 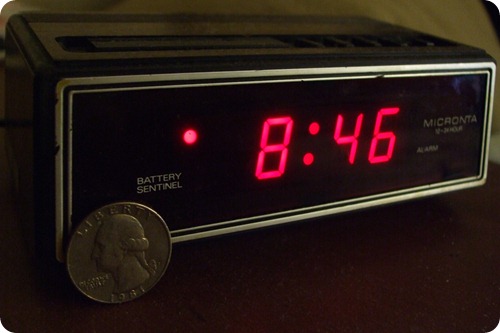 It's a little beat up but still works great. Were I to guess, this clock was made in the mid-to-late 80s or early 90s. It has a faux wood veneer but has a very classy look to it. These little guys are easy to come by, and call me crazy but they look way, way better than most nightstand clocks made today. There's something about the faux veneer and silver outline that just works.