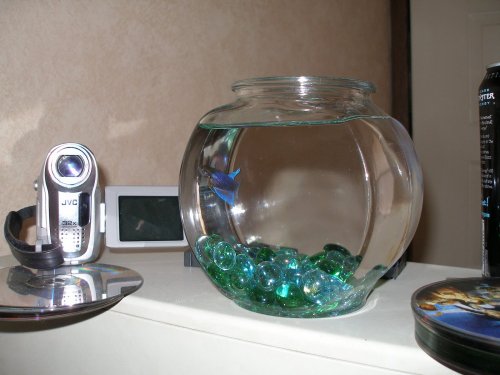 I'll cut to the chase in case you couldn't tell what happened by the titled of this entry: Bob VI is dead. And, of course, the way he died is nothing short of comical.

Today was bowl-cleaning day. So I put him in a salad bowl (with water obviously) as I cleaned his "house". Bob jumps OUT of the bowl and behind the refrigerator. Confused? I have one of those "half-high" fridges which is directly next to the sink. Now picture in your head that you're cleaning his bowl and *whoop*, out the bowl he goes behind the fridge. Even if you can't visualize that, you get the idea.

There was no way I could get to him - and I have the sneaking suspicion this is the way Bob V died as well (which to this day remains a mystery).

So.. off to Pet Smart to get another fish, pictured above.