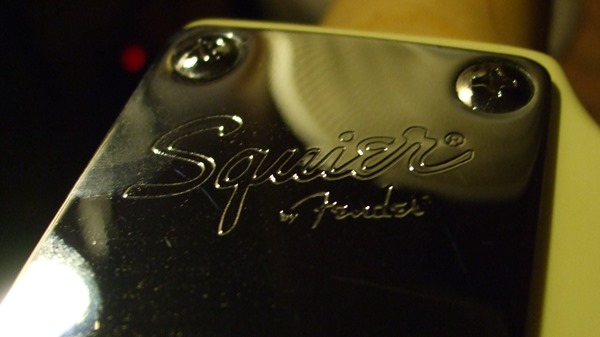 Some bad news. The Standard had to be returned as the neck did not bow back properly and continued to have some significant fret buzz. That, and the neck just felt thick in the wrong kind of way for my hands. Can't really explain it any better than that.

Above is a photo of my current main guitar that I keep going back to over and over again, the Bullet Strat. I think the bolt plate on the rear is the only part of the guitar I haven't taken a photo of.

After returning the Standard, I decided to do a major cleaning on the Bullet, which involved taking off the pick guard. I confirmed that the body color has in fact darkened a few shades, which just goes to show that polyurethane coated bodies do change color over time.

While at Guitar Center I tried out a few guitars, but before I get into that, a few words about the Bullet.

I find it absolutely incredible that the second-to-lowest cost Squier (the only guitar lower in price in the lineup is the Mini) proves time and time again to be best playing, most-trouble-free, best-character guitar they have. I've gone through several Squiers since buying my Bullet in 2010 and they simply don't stack up to how great the Bullet is. The non-gloss neck feels right, the frets feel right, it all just feels right. And while the Bullet pickups are admittedly a bit on the weak side, it does have character. Add on a booster pedal and you've got yourself one seriously amazing sound.

That being said, I tried out a few other guitars when I went to return the Standard to Guitar Center.

I tried a maple-board (yes, they actually had one) Affinity Strat in a sunburst finish. This particular one wasn't good. Pickup tone was bland and lifeless, the neck had an odd feel to it that I really can't describe other than "doesn't feel right", and there were some seriously weird tuning issues with it no matter how much I stretched the strings (which I must have done at least 10 times just noodling around with it). Fit and finish were fine, no sharp fret edges or anything like that. But like I said, just a "blah" guitar.

A few weeks back when I played a Squier Affinity Telecaster on the other hand, that guitar was just fine front to back, and sounded good too. Can't explain why that is, but it is.

Another guitar I tried was a black-on-black Squier Bullet Telecaster HS, as in humbucker in the bridge and single-coil in the neck. Played fine and felt good, but that humbucker was so dead sounding. With pickup replacements, it would have been great. Also, I'll give credit that the switchgear and knobs were perfect on it.

Finally, I tried a Squier Cabronita Telecaster. Yep, the brand new model. Black with maple board. Pickup tone is really, really good. Sparkly, spanky, and even with the lack of a tone control, it's just a damned good-sounding guitar. However there's only one rather huge problem with it. It has a gloss neck coating which made it feel like total plastic. Were it not for that gloss coating, the guitar would be perfect. Yes, I mean that. If I knew how to refinish a neck, I probably would have bought the guitar and done a satin urethane coating on it. But being I don't know how to do such things, I gave it a miss.

Anyway, the Standard didn't work. But I did learn that alnico magnet pickups are f--king awesome. I won't be replacing the pickups in my Bullet because I like the character of the guitar too much to mess with it.

However, if I get another Bullet Strat (which I might), I may specifically mod that into a "Super Squier" of sorts. Not really a hard thing to do if you know what parts and upgrades to get - which I do. 🙂

Here's the lone video I recorded of me playing the Standard.