squier standard stratocaster on the way

As you know, I recently acquired a 1971-style Fender Stratocaster waterslide decal, "WITH SYNCHRONIZED TREMOLO" and all.

Since receiving it, I've been searching around for a suitable neck to put it on. I've basically searched everywhere. Everywhere online, that is. Warmoth, eBay, other online retailers... I even looked at Mighty-Mite as they are licensed to use Fender designs.

Well, here's the problem I ran into. Actually, there are a few of them.

My original '93 Fender USA Strat has a one-piece maple neck, so I wanted a neck like that to fit my USA body, with the difference being I wanted a large CBS-era headstock since I have a '71-style decal in my possession.

You would not believe how difficult it is to find a complete (keyword there) one-piece maple neck that uses a modern "C" shape with medium jumbo frets that will fit a USA standard Stratocaster body for a decent price.

...will cost you $257 before tax and shipping. Yes, you can get a brand new logo-less CBS replica Strat neck, but where the price jumps is if you add in a nut and a finish. Without nut and finish, the neck is $157. Add in a nut, $25 gets tacked on. Add in a clear satin nitro (which is in fact the lowest-priced neck finish), and $75 gets tacked on.

...is a crapshoot at best, because you never really know what you're going to get. It's also next to impossible to find a one-piece maple neck with the CBS headstock that has modern measurements.

Modern is this: C shape (a.k.a. "slim oval"), medium jumbo frets, 9.5-inch fretboard radius. That's it. Sounds simple enough, but wow is it tough to get for a price that's right.

You can find small-headstock Fender and Squier necks as a one-piece maple that match these measurements all day long. No problem. But as soon as you go into big-headstock territory, you won't be able to find anything at all.

A few examples of necks that don't cut it, or just can't be found:

You can take a neck with a 1.65-inch nut width and the strings will match up even on a body and bridge designed for 1.685-inch, because that's only 0.035ths of an inch (or .89mm) difference. So for those wondering if you can take a Mexican neck and slap it on an American body, the answer is yes, you can. And the neck pocket will usually have a nice, snug fit. The only shims required would probably be nothing more than two business card's width. Maybe just one.

My problem is that there are no CBS-style Mexico one-piece maple necks with the big headstock available right now for a decent price. Two brand new models, the Deluxe Lone Star and Deluxe Roadhouse, do in fact have those necks. But since they're brand new, nobody has started parting them out on eBay yet, so you can't buy one individually. Not for cheap, anyway.

Now I'm at the point where I'm thinking to myself, "It would probably be cheaper and easier just to buy an entire Squier Standard guitar rather than just the neck."

I headed over to used.guitarcenter.com and did a search for Squier, not expecting much. But, as luck would have it, there was a Squier Standard Stratocaster in Metallic Black with the one-piece maple neck.

And yep, I bought it. No, I don't have the guitar yet. It's in Pittsburgh at the moment and will be shipped out to Tampa where I will pick it up in a week or so.

If you're wondering how much savings this was over a new one, the answer is I paid $188, which is about 24% off the new price, all told (tax + shipping included, and cheaper than a new Affinity with tax included). And yeah it is the best price going. On eBay, there was only ONE GUY selling one for less, but it was a "no returns" sale, so that was out.

If you just said to yourself, "Shoulda bought it off Craigslist...", there is nobody selling a Standard model with the one-piece maple neck locally. Yes, I looked.

Guitar Center is basically the only place right now where I can buy this very specific guitar used from anywhere in their network (Pittsburgh, in this case), try it, and if I don't like it I can return it for a full refund. I made damned sure to ask this while on the phone with them. And they said yep, if I don't like it I can return for a refund. I'm assuming I get at least 14 to 30 days to try it out, which is more than enough time to decide if I like it or not.

In addition, I also specifically instructed them to inspect the guitar once it arrives at the store. I specifically do in-store pickup because they check they guitar on arrival, and if it arrives broken, I can get the refund without ever having to go to the store.

Supposedly, the Squier Strat I bought is "4-out-of-5 star" rated by GC, meaning the only thing wrong with it should be a few finish scratches. That's fine since it's used. But if there are any major issues with it, nope, I'll take the refund.

Why a Squier Standard?

A Squier Standard Stratocaster is the absolute closest thing measurement-wise to an American Standard model without it being American.

What I mean by that is this:

Remember, the Mexican Standard is a 21-fret and not 22. So the Squier Standard matches more towards the American model for that reason. Yes, one fret does make that much of a difference. I personally prefer 21-fret, but 22-fret is what my USA came with originally and I was trying to match that as closely as possible.

Now the idea I had here was to - assuming I like the guitar enough to keep it - take off the neck, attach to my USA Fender and see if it fits right. If it does, sand off the logo, apply the Fender '71-style logo and that's that. Done deal. After that I just part out what's left on eBay.

But here's the funny part. I might like this guitar enough to use it as-is, look and all.

The Squier Standard is one of those "sleeper" guitars that actually has some premium hardware in it.

Here's a closer look at the saddles from a Squier Standard Strat so you get a better idea of what I'm talking about: 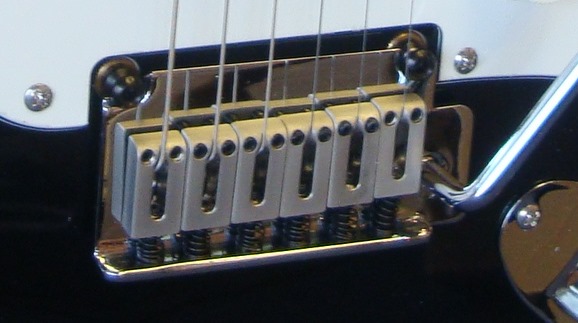 Those are pro-grade Strat saddles that will always outperform those craptastic bent steel pieces of garbage. Maybe they don't "look vintage", but they sure do work better. Once your string heights are set, you'll love the fact the strings will stay put and will not slide all over the place. Even if a bent steel saddle has a notch for the string to sit in, sorry, but that's just not good enough. It's gotta be full-block or don't even bother. Also, you get way more height adjustment with full-block compared to bent steel and there is never any threat of a saddle height screw falling out during adjustment.

The Squier Standard Stratocaster is in fact good enough to be used as-is without modifying it at all.

I did entertain the idea of buying an Squier Affinity Telecaster to get a guitar with a one-piece maple neck on it (and did try one out). I also tried out a Squier Jazzmaster just because it's so different from the kind of guitars I usually play (it's a great guitar, by the way).

Ultimately, I gave the Tele and the Jazz a miss because at the end of the day I'm a Strat guy. Yep, I admit it. True, I own a Les Paul, but no matter what guitar I own, I always go back to Strats. The kind I like, that is...

...and once I got the '71-repro decal, that's where I got the idea to "rebuild" my USA Strat. But hey, who knows? The Squier Standard might be good enough as-is.

I've absolutely no idea if I'll like the used Squier Standard Stratocaster in Metallic Black or not. But I'll find out soon enough.

Yes, the guitar is black. And yes, I've said many times I don't like black guitars. However, the difference with the Squier Standard's version of black is that it's black metallic, meaning there are little reflective flakes in the paint. I'll explain why that's important in a moment.

The reason gloss black shows scratches so quickly is because there's nothing to hide them. Even the tiniest hairline scratch will stick out like a sore thumb on gloss black.

Oh sure, you could keep a polish cloth in your case or gig bag and keep rubbing those tiny hairline scratches out caused by your hands or pick. But as you keep doing that, spots were you rub out scratches the most get dulled, meaning everything else will be nice and shiny except those areas where you keep rubbing scratches out.

The solution to this problem? There is none. All gloss black guitars do it.

There are certain black finishes that don't do this however.

Metallic, out of all other black finishes you could get, hides scratches best. Why? Because the metallic flakes are the best at hiding scratches since they are in fact more reflective than the actual scratches are.

The only way a scratch gets noticed on metallic black is if the scratches are deep and obvious. Otherwise, the flakes mask hairlines scratches easily.

So anyway... assuming the guitar doesn't arrived wrecked into Tampa, I'll give my report on it once it's in my possession.

And if it's good enough to be used as-is, I will use it that way and won't sand off the logo or anything like that. If that's how it is to be, I'll just keep the guitar, enjoy it, and get a neck for my USA Strat another day.