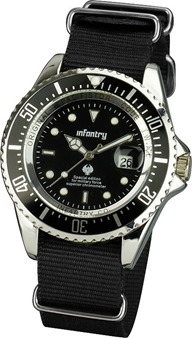 I bought one of these. And sent it back.

It is said in horology circles that every man needs at least one dive watch. Yes, needs. And being 2015 was the year I truly got into watches, why not try out a cheap dive watch in 2016, that being the Infantry IN-019? Well, that was a mistake.

While every so often you can come across a gem when buying cheap, this is not one of those times.

Now before getting into the review of the IN-019, I will say this first: The only, repeat, only inexpensive dive watch under $100 worth buying is the Casio MDV106. That is a true diver's timepiece. And by "true," I mean you can actually dive with it. After the Casio, the next step up is a Seiko SKX007 series, and any one of those starts at $175, with better models in the $200+ range.

The Infantry IN-019 is under $20. I had mine less than a day before I decided to return it, and I'll tell you why.

First, the specifications were wrong. It's stated the watch is 55g in weight with nylon strap. Wrong. It's 65g. I weighed it myself.

Third, the crown had sharp edges that dug into my wrist.

I do like the idea of a diver's watch even though I don't dive, but the IN-019 just wasn't up to the job.

What can a diver watch be used for?

Easy answer, and the reason I wanted to try one in the first place: Use as a timer.

On all my digital watches (I have 3,) the countdown timer feature is present. I won't wear a digital that doesn't have a timer function on it.

The original purpose of the rotating bezel on a diver watch is to time how long you've been in the water so you know when to surface before the air from your tanks runs out. Before jumping in the watch with your dive gear on, you rotate the bezel's arrow marker (as in the zero marker) to the minute hand's current position, then jump in. As the minute hand moves away from the arrow marker, that tells you how many minutes have elapsed.

Also, the bezel is purposely designed to only rotate one way so when underwater you don't accidentally add more time to the timer.

I don't dive, but I do like a watch with a timer feature on it. While true I could use an analog with chronograph, I like the rotating bezel better.

For the time being, I'll stick to my Casio digitals for the timer feature. Eventually, I'll get myself a nice dive watch. And it probably will be a Seiko.