The worst thing about owning a Squier electric guitar 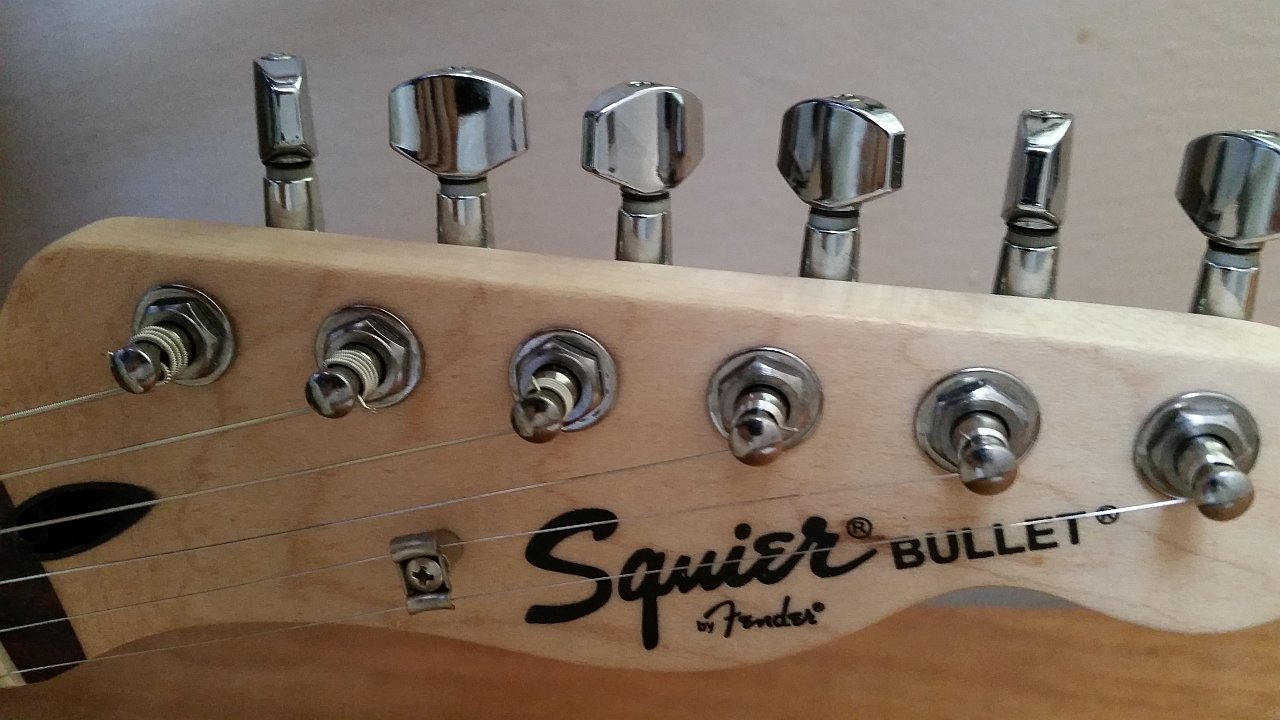 Squier guitars are great, but there is thing about them that's very annoying that can't be avoided.

Above is the headstock for my Squier Bullet Telecaster. I own several Squiers, and they're great guitars...

...except where tuners are concerned.

I don't hide the fact that the tuners are the one weak point of Squier electric guitars if they're the sealed type. The vintage slotted type as seen on the Vintage Modified and Classic Vibe Series Squier electrics have tuners just as good as Fender, but where the sealed a.k.a. "closed" tuners are concerned on Affinity, Bullet and a few other Squier models, they're not-so great.

I was asked on my Facebook page what would be a good set of tuner replacements for the Bullet Telecaster. My answer was that I had no answer because I did not know the measurements of the pegboard hole where the tuner is inserted - and that before shopping for any tuners at all, measure that stuff first.

A modern Fender pegboard hole diameter is supposed to be 13/32", which is exactly 10.32mm metric, meaning 10mm will fit as it is ever-so slightly smaller. If your Squier guitar has the type of tuner that is secured to the headstock with a nut on top of the pegboard (like Bullet and Affinity,) it is probably a 10mm hole. PROBABLY. You must take a tuner out and measure that hole first.

A vintage Fender pegboard hole diameter on the other hand is supposed to be 11/32", which is exactly 8.73mm...

...but as I said above, if you have one of the Vintage Modified or Classic Vibe Squier guitars, believe me, there is no reason to switch out the tuners. Swapping them out with a Fender slotted set will not improve tuner performance at all.

However, if you want to switch out those slotted tuners for sealed like the mini Grover Rotomatic, those should fit the 11/32" hole as I do not believe a "metric version" of the slotted tuner exists, not even for Squier. But again, measure that pegboard hole before buying; it's an absolute requirement.

Will drilling be required for Squier tuner replacements?

Does this mean there will be small, ugly exposed screw holes left behind on the back of the headstock? Yes. Some guys get around this by filling the holes in with wood filler and then color match to the wood as best they can. Another option is to paint a thick black "stripe" on the area of wood where the tuners go, and fill in the area with black filler (which actually works quite well to conceal the holes.)

In the end, yes, Squier tuners can be upgraded. But it's never been an easy process. I know of no drop-in solution that works with Squier guitars.