My previous computer setup, to be blunt honest, sucked. It was a challenge at best to be comfortable at my "station" in my apartment.

It's amazing what a cheap fold-out table can accomplish. 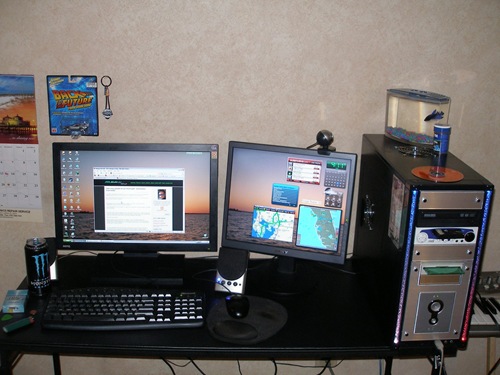 My station has now been upgraded to a command center. Originally I acquired this table from my boss for video use - and it is being used for that (note the webcam placement), but moreover I now have space that is so much easier to work with. Everything is laid out in nice'n'neat order, and wouldn't you know it, the table is exactly the right size for what I needed it for.

Monitor 1 is a BenQ 20-inch plugged into the DVI video card port.

Monitor 2 is a Sony 17-inch, plugged into the VGA video card port.

The speakers are el-cheap-o Altec Lansing's. Ten bucks well spent. The fact the right one has a blue light is cool.

The mouse and mouse pad are both ancient. I absolutely positively refuse to get rid of either. The mouse is a plain Jane Logitech USB optical which is not made any longer (not in that shape anyway). The mouse pad is a Radio Shack brand with a built-in wrist wrest. I have tried for several years to find a replacement that's shaped like this one - but there are none to be found. It has seen better days and is nasty looking, but I don't care; it works.

On top of the PC is Roberta the fish, with her food close by.

The PC is the new one I just built recently (with parts contributed such as the Plusdeck audio cassette player and the case by my boss).

That thing on the left side of the case is a magnetic calendar I picked up at a local trade show a few months back. And no, it does not affect computer use at all because the magnetism is very weak by design.

On the wall on the left is another calendar and my Back to the Future mementos from Universal Studios purchased just before they closed the ride. 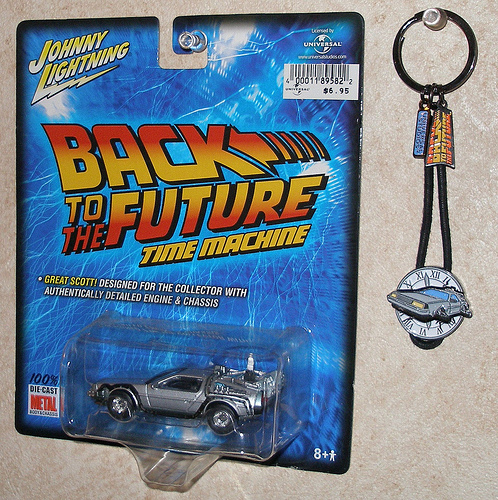 Both of these items were purchased from Universal Studios Orlando. Each is marked as such. If you look at the top right of the package for the toy car, you'll see the Universal globe. On the keychain, the small blue thing off the main keyring is says "Universal Studios".

I'm sure neither of these are worth anything to anyone except me, but that's okay. 🙂