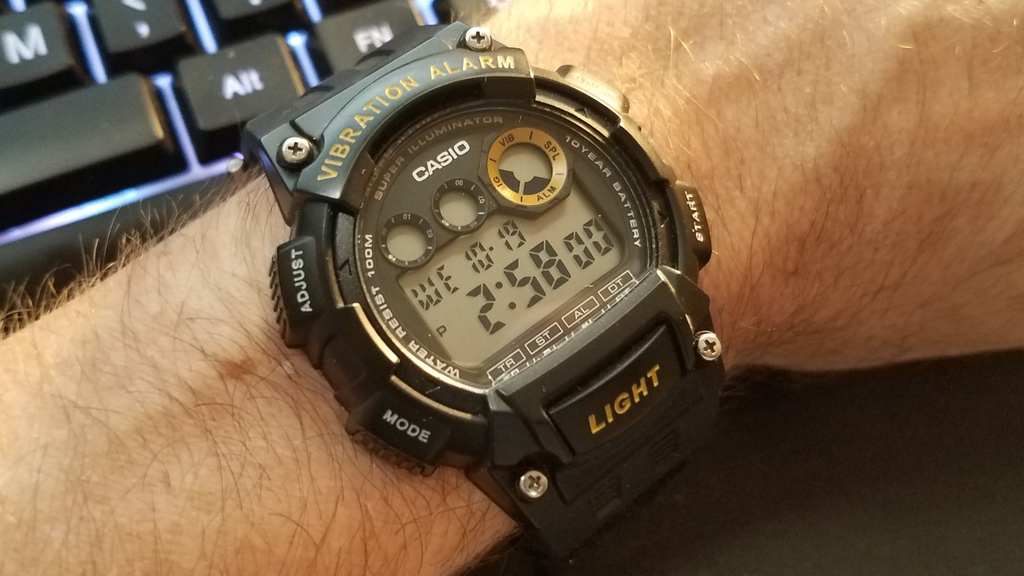 I seriously cannot believe how much I wear this thing.

When it comes to watches, I prefer something digital that has weekday, full date and time all at a glance without having to press a button. For when I do want to press a button, the buttons have to be large. For extra features, I want an alarm, countdown timer and a stopwatch. Last, but not least, it has to be something that can take a knock.

The Casio W735H (it's cheap and easily available) is all of these things.

I bought a W735H back in March 2021. That same month, I bought a second one because I was convinced at the time that it would be my daily wearer, so I wanted a backup since it was cheap enough to get a second. But then shortly after that, they went in a box and I forgot about them.

Over a year later, frustrated with the metal bracelet on the watch I was wearing, I remembered hey, I've got that W735H. Let's try that again.

It's been on my wrist ever since.

This watch will never win any beauty awards, and some may even consider it ugly - and that's where my "I don't care" reasoning for wearing this begins.

I have other watches that look far better than the W735H, such as the Casio MTP4500D. But even though the 4500D looks better, it's nowhere near as useful as the W735H.

Right now I'm at a point in my watch wearing life where function matters more than form does. The "Super Illuminator" nightlight on the W735H is amazing with its bright white light. I can actually make this watch SHUT UP while still giving me notification of an alarm, hourly signal or timer by switching from beep to vibration at any time. The buttons are big and easy to press. Surrounding the crystal are four raised areas, meaning if I hit the edge of a door with my wrist (which I have), the display doesn't get scratched. I've used this thing while cooking and got oils spotted all over it, but it cleans off easy every time.

I don't shower with this watch on, and that's generally a good practice because hot water can cause condensation under the crystal. Would I go swimming with the watch on? Yes. But I'd never wear it in the shower.

The best compliment I can give the W735H is that I don't think about it. It's tough enough to handle life where I can wear it anywhere and not worry about what happens.

Also, I finally stopped obsessing over my watch having exact to-the-second time accuracy. When I started wearing the W735H all the time, again, I just don't think about it. There was a point when I was synchronizing my watch to time.gov daily. That turned into weekly, then monthly, and now I only adjust every 3 months or so. At worst, this watch is only off by about 6 to 8 seconds. Totally acceptable. I could honestly get away with only adjusting the W735H twice a year, and only because of Daylight Savings Time.