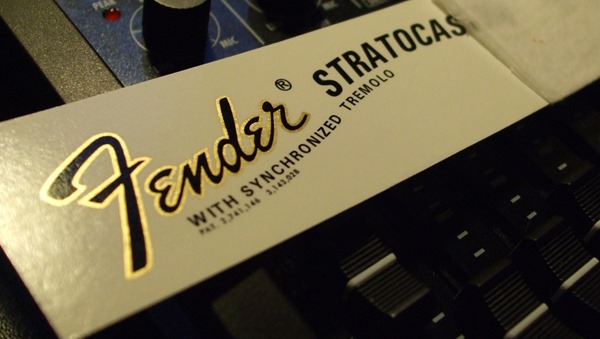 Above is a waterslide decal I received in the mail recently. Yes, it is the impossible logo, as in my absolute favorite Fender Stratocaster logo of all time, the early-1970s "swoop" STRATOCASTER lettering in combination with the "swooped" WITH SYNCHRONIZED TREMOLO beneath it.

Did I pay for this? Nope. I was having a phone conversation with a professional luthier I know, we got to talking about Stratocasters, I mentioned my favorite Strat logo treatment, and he just happened to have one (a few, actually), so he mailed it to me. I'm not saying who the guy is because I don't want to get him in trouble.

When I get the money, I plan on using the logo on a Warmoth CBS-style replacement neck for the busted one on my 1993 USA Standard Stratocaster (the '93 neck has a popped truss rod). So to anyone who thinks I'm going to slap on a logo and sell the guitar, you can be rest assured that will not happen as I will only be using the decal for personal use only.

I called the early-1970s waterslide decal the "impossible logo" because there is only one Strat model made by Fender right now that has it, and that's the Yngwie Malmsteen Strat. Unfortunately, that Strat comes with a dopey scalloped fretboard, and I have zero interest in that.

You might think, "Well, okay. What about the Classic Series '70s Stratocaster?" A fine choice, but it does not have WITH SYNCHRONIZED TREMOLO on the logo.

Yes, I am very, very particular about this. 🙂

Now on top of that, the '70s Strat has that huge U-shape neck on it, which I don't really like (U is a really thick neck shape). I prefer the modern C-shape.

Basically put, I'm forced to go with a repro logo just to get what I want, as Fender does not make any Strat that has the early-1970s logo treatment I like except for the Malmsteen Strat which I don't like because of the dopey scalloped fretboard.

I am absolutely not looking to recreate a '71 Stratocaster, because in all honesty, I can't. Well, not without paying a ton of money for it.

Fender collectors know that in the CBS era when the big swoop logo with the tremolo wording was used, "F tuners" were used along with F spacing.

What does that mean? It means you can buy F tuners right now, but they will not fit a modern Strat neck because the spacing between the holes is different. And being that Warmoth does not make a CBS repro Strat neck with F spacing, you either have to order a neck with no pegboard holes precut and drill them yourself, or have a luthier do it. Or I guess you could call Warmoth up and tell them to drill holes with custom F spacing, but I don't plan on doing that.

What's an "F tuner" exactly? Think of it as a Kluson-style tuner but with two major differences other than the spacing. The rear covers have trapezoid-shaped plates (meaning not square or rectangular) and the tuner buttons are somewhat squared off, similar to modern Fender tuners (meaning not oval-shaped).

Anyone can slap on an early-70s logo on a pegboard, but without the F tuners and F spacing, if you see Kluson-style or modern tall posts, that's a dead giveaway it's a fake.

For my repro neck, I'm not even going to try to hide the fact it's not a '71, especially considering the body is Midnight Blue, a color not even offered in '71. I plan on installing vintage-style tuners on it because I've no interest in having F spaced holes just to get those specific F tuners (which in all honesty aren't that great at all).

I also have no interest in having '71 electronics, which at the time was only a 3-way blade and not 5-way.

All I wanted was a modernized Strat with the old early-70s logo. Now I have the logo. When I have the cash for it, I'll get the Warmoth neck.

Why do any of this?

The '93 USA Strat I have was an 18th birthday present from my father. And even though by the time I'm done with the guitar the only original components will be the body, bridge system, pick guard, rear cover plates and original "football" output jack, that's fine. The guitar will be functional again with the electronics I want and the look I want.

No part of this guitar other than the logo will even come close to a '71. And that's fine. It'll just be my USA Strat, the way I want it. And that's what matters. My dad passed away a while back and I know he would not want me to throw out something I could otherwise repair and make usable again, so the guitar will be rebuilt and made functional again. And it'll be awesome when it's done.