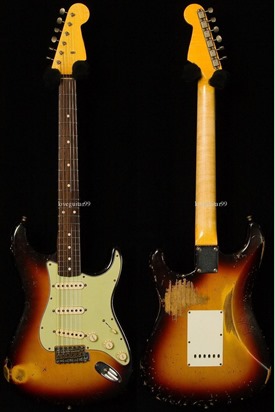 What you see is a China-copy Fender, jokingly known as "Chender" '61 Relic Stratocaster, and I could buy it right now if I wanted. The price? $372.60 without shipping. With shipping, probably around $425 or so.

To note, yes the headstock is correct shape. It looks wrong in the photo because you're seeing guitar stand grips. Believe me, the shape is correct.

Even though I'm not in the market for a Strat, I briefly thought about buying something like this. I wouldn't buy this exact guitar because there are a few things glaringly wrong. The rear pick guard plate is solid white and not mint green like the front pick guard color is. The bridge if you look closely was not mounted correctly, which probably means it will never be able to be intonated properly. The bridge is also "not aged enough" to fit the '61 look. The fret inlays are white and not parchment. And there are a few other things you'll probably be able to detect that aren't correct just by looking at it long enough...

...but the point is that this guitar is over $3,000 less than a Fender Custom Shop version of the real thing. And for some, that alone is worth dealing with the "wrong" things about the Chender.

Why haven't I bought a Chender?

Were I in the market for a Strat, I wouldn't even bother with the Chender since Squier has Classic Vibe and Vintage Modified series. If I wanted a sunburst Strat with the rosewood fingerboard, I'd go get a Squier Classic Vibe Stratocaster in that finish and wouldn't think twice about it. The price is less and I know the construction of the guitar is better. I also get a warranty and can return it easily if I don't like the guitar for whatever reason.

If I wanted a Fender Strat copy real cheap, I'll tell you exactly what I'd do. I'd buy the Squier I just mentioned above, sand off the finish and logo on the front of the headstock, refinish, buy a Fender repro decal acquired from eBay or a China trade site, slap it on and call it a day. And if I wanted that oh-so stupid "relic" look, that's not a difficult thing to do. Some say it is. It isn't.

The only reason anyone buys a Chender is either because it has a Fender logo on it, or like the guitar pictured above, the headstock is blank so a Fender logo can be slapped on later.

If I were all about the logo, I would have owned at least 3 Chender Strats by now. But I've never owned one, and don't plan to.

There's another reason I don't own any Chenders. I've never seen a Chender version of a Jazzmaster or Jaguar. If you want Strats and Teles, sure, there are Chenders of that which go on for days. But for Jazzes and Jags? Nope.

When you buy a Chender, all you're doing is trying to impress other guitar players, and that's stupid. You know the guitar is a fake, but you want other players to think it's real.

On the flip side of that, if you buy a full-priced 100% real American guitar with the thought of, "Yeah. My guitar friends will respect me now!", that also means you're an idiot, because you're attempting to impress other players just like you would be with the Chender. The only difference is that you spent a lot more.

When you buy a guitar, you buy for you and only you. If you want to get noticed more, put some cheap lights on your guitar. I guarantee people will pay more attention to you compared to the moron with the famous-only-to-guitar-players logo on his guitar's headstock. People don't care about logos on headstocks. But they do like lights that blink because it's entertaining.