Vintage vs. Modern tuners on a Stratocaster

I have a confession to make. Before I bought my new Squier Vintage Modified Stratocaster, I never owned a guitar with vintage tuners before. However, being I know how they work, this didn't scare me and I was ready for them. The first thing I did when I got my 2012 VM Strat was a string change, and I was able to do it easily. However, I'm well aware that a lot of you out there want to know what the deal is with vintage tuners, what advantages they have, what disadvantages they have, and so on.

Let's first take a look at what vintage tuners actually look like. 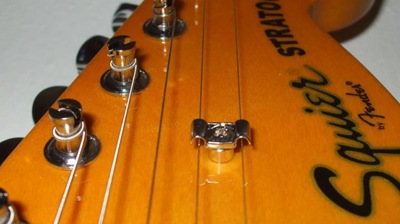 What you're going to notice up front is that the top of the tuning post is slotted and open, and that the guitar string seems to be going inside the post in the middle - which is exactly what's going on here.

This is a big difference compared to modern tuners where the top is completely closed: 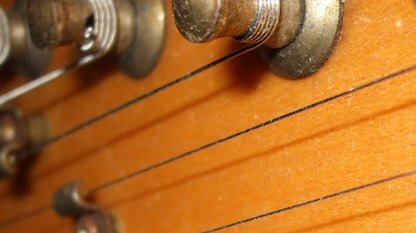 The way modern Strat tuners work is that you insert the string through a hole in the tuning post, give some slack before winding so the string wraps around that post a few times, then clip off the excess afterward.

Why are vintage tuners so desirable on a Stratocaster?

Vintage tuners don't give you any advantages as far as better tuning or added prevention of string breakage or anything like that.

The only reason for having vintage tuners is because they look cool. The tuning buttons have that cool oval shape, and the open "fork" at the top of the tuning posts just has that cool vintage Strat look to it.

This is basically the same reason why a Les Paul player would want the white plastic "tulip" tuning buttons (the buttons are shaped like a tulip flower somewhat) instead of the metal Grover Rotomatics. In that instance, the Rotomatics are far superior to the tulip style in pretty much every way - but they don't have that cool vintage look to them.

With modern tuners, you clip the excess string after you wind up the string on the post, and this is why there is always a piece of string sticking out where you clipped it.

With vintage tuners, you clip the excess string before you wind up the string on the post, and this is where the confusion begins for most people because it's completely different compared to the way modern tuners work.

How to install strings on vintage tuners

This video shows how it's done (the part where the string installation starts is at 2:45):

On a Stratocaster with modern tuners, it's generally a good idea to have at least three wraps around the post. On the lighter strings you can even go up to five or seven wraps. In my experience, more string wrap around the post on a modern tuner does keep the guitar in tune better and strings break less. Why? Because with more wrap, the angle of the string from the tuning post to the nut is lower. This is especially an advantage for the strings that use string trees (also known as string guides). The lower your string, the less tension is placed against the string tree, the less string-to-tree friction you will have and the longer your string will last.

With Strats that have vintage tuners, everything is the exact opposite.

The most wrap you want on a vintage tuner is one to two wraps. Vintage tuners by nature are a lot shorter, so they don't need a lot of string wrap since they're much closer to the headstock. If you use the "two-post" measuring method as shown in the video above, you'll always get the right amount of wrap.

Will you love or hate your vintage Strat tuners?

This basically all depends on what gauge of string that you use.

It's never the lighter/thinner strings you have to worry about, it's the heavier/thicker ones.

If you use any string that's over 50 in size, you'll have problems when installing strings.

When you attempt to get a string over 50 in size around a vintage tuning post, this will not be easy. It's possible, but it will require the use of a crimper just to get the winding process started after you place the end of the string in the center hole - and you will barely be able to get even a single wrap of string around the post because you're fighting against how short the post is. You basically run out of room on the post for wrap real quick.

I'll put it another way. Let's say you're a metal player and want those really heavy bottom strings for drop tunings. If that's you, you're not going to like vintage tuners at all, and should stay with the modern tuners with the taller tuning posts so you can actually have something to wrap that heavy string around. It's either that or you'll just have to stick with strings that don't go over 50 in size on the bottom end.

I don't use heavy strings, but if I did, the heaviest I'd dare go with a Strat that has vintage tuners on it is 11-49. And even then I'd be worried about getting that 49 wrapped around the 6th post. Is there that much of a difference between a 46 and a 49? Yes, absolutely.

Things to remember about vintage tuners

The vintage tuners are shorter. It's really easy to think that all Strats look exactly the same on the headstock concerning the tuners, but they're not.

When vintage tuners were originally designed, they were meant only to accommodate up to a maximum of "heavy jazz strings"

Back when the Strat was originally designed in the 1950s, heavy metal didn't exist as a music genre. As such, the only reason any player actually needed heavy gauge strings back then was for playing jazz music for more bass tone and greater sustain.

It's rare you'll ever find a heavy metal player that uses super-heavy bottom strings using vintage tuners on any guitar, Strat or otherwise. Those guys and girls need the taller posts for the heavier string, else they would have a very difficult time tuning up.

Vintage tuners today are manufactured using the same dimensions they have in the 1950s for tradition's sake, and I'm not aware of any tall-post vintage tuner.

I like my vintage tuner set on my VM Strat as they work well and can fit a 9-42 string set (what I use) easily, but if you're into the metal thing with the heavy gauge bottom strings, stay with modern tuners instead.