Who are the WORST music gear hoarders?

I'm a minimalist by nature when it comes to music gear because I don't like clutter. Whenever I can do what I want musically using itty-bitty hardware, I'll do it. It's part of the reason I bought my Casio SA-46. Yes, that's a kid's keyboard. But it operates on AA batteries, can be picked up with one hand easily and stored easily. And it sounds cool. You can't get lightweight convenience like that that with a Roland Juno-60 (pictured above, which I did own at one point).

Aside from the keyboard thing, certain types of musicians hoard more than others. Let's find out who are the worst.

An acoustic drum set even in its smallest usable form (which is more often than not a 5-piece kit) takes up a good amount of space, so it's not like you can go small with this stuff. And I've never known any drummer to hoard drums, because the longer drums sit, the more unplayable they become because of things like wood shrink. In addition, piecing together kits from different sets almost never sounds right and just looks stupid even when the pieces from kits are the same color. Drummers just don't mix-and-match pieces like that, or at least not the ones I've known.

I think the only thing I've ever known drummers to somewhat hoard are cymbals. Every drummer I've ever known always has a ratty old crash cymbal or two that really should have been thrown out a long time ago, but keeps them "just in case". And of course a drummer always has a few china cymbals that don't get used. Why? Because china cymbals are cheap, barely take up space and are easy to acquire even if they barely or never get used. But even then, I don't see drummers hoarding those too often either.

I've never known a drummer hoarder; they seem to be the most practical as far as musicians are concerned. When drums and/or drum hardware wears out, the drummer will sell them off or throw them out, then replace what gets used regularly; that's not hoarding.

The bass player who is into vintage gear is almost guaranteed to be a hoarder simply for the fact that old bass gear is ridiculously bulky.

When you go back to 1970's gear and start getting into vintage Sunn and Ampeg amplifiers, they're jokingly called "refrigerator" amps because they literally are the size of refrigerators. Bass guys who collect these things have to hoard because the gear takes up so much damned space.

When it comes to bass guitars, yeah you may find a bass player with 5 or more basses. However, it's usually true each bass serves a specific purpose. One is a 4-string, the next a 5-string, the next is another 4-string with piccolo strings on it (those are +1 octave bass strings by the way), and so on. Rarely have I seen a bass player with exact carbon copies of the same guitar; there is a reason for each bass the player owns.

Where bass players are guilty of hoarding is with electronics more than anything else. It's small stuff, but a lot of small stuff. Boxes of pickups, wires, potentiometers, tuners, and well less than half the stuff in those boxes of crap actually work.

For example, a bass player will yank out a set of bad pots, yet keep them. That bad pot set can never be fixed and the set is total junk, but they get tossed in the parts box because he just can't bear to throw those crappy pots out. Why? I don't know, but he has a really hard time doing it. Later on, that parts box gets totally filled up with electronics crap, and then starts a new box of crap. That guy just needs to sit down, go through that whole box, save the less-than-1% of stuff that actually works and then toss the rest in the trash.

There is something else that bass players hoard. Strings. They do this a lot. Bass strings last a really long time (30-year-old sets are known to exist and still be usable), but the hoarding happens when a bass player saves strings he doesn't even like. Yeah, those saved strings are usable, but the guy would hate to use them if he had to. All those hoarded strings need to be tossed.

Considering the fact a Roto 66 stainless set is 20 bucks, and Roto 77 flats just under $31 for a set of those, I mean, seriously.. c'mon. There's no reason to hoard old strings when new Rotos are so cheap.

Guitar players are, by far, the ones who claim to be "collectors" more than any other type of musician when in reality they just have a big pile of crap.

Guitar hoarding isn't just guitars themselves. Like bass guitar gear hoarding, a lot of it is also amplification and electronics. 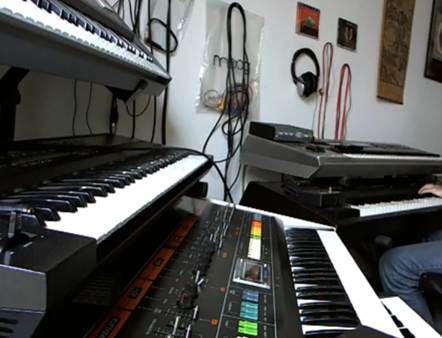 Heaven to a synth nerd. 6 synths (the 6th is hiding at bottom right).

Synth players are the the worst of the worst when it comes to gear hoarding. If you thought guitar players were bad, ha! The synth player will prove otherwise.

Nobody hoards gear like a synth player, and there's several reasons why this is true.

Synth players drink the same Kool-Aid guitar players do when it comes to trying to achieve a certain sound.

Example of synth player's mentality: "If I get that same Oberheim OB-Xa that Eddie Van Halen used, I'll totally be able to get the exact same Jump sound he got."

No, you won't, and I'll tell you exactly why.

Never does it enter the synth player's mind for a second that Eddie sometimes fed a synth through a guitar amplifier (so he could play it along live with the band). Never does a synth player consider the synth might have been fed through effect pedals like the BOSS DD-7 and/or BOSS RV-5 (both modern pedals, but either can easily achieve vintage-style sounds). Never does the synth player "think live". All he or she knows is crisp, clear studio sound, when in fact that's that's the totally wrong way to get the Van Halen synth sound.

In other words, a ton of synth players never think beyond the synth, so to speak. They believe that synth and synth alone is all that's ever needed. No, it isn't.

The end result of the synth-and-synth-alone mentality is that players start buying many synthesizers, all of which take up a ton of space, all of which will never get "that sound" because their brains stop after the end of a 1/4-inch cable goes into a mixer.

The belief that bulk = cool

Synth players absolutely love big, bulky gear. And whether they choose to admit it or not, it is a reason why so many of them go after the behemoth-size synths of the 70s and 80s. It is the look they want, because they feel walking into a room and seeing a sea of plastic piano keys is just The Best Thing Ever. Some will even turn all those synths on and dim the lights so they can see all the LEDs and display panels light up, almost like a city night scene.

You how how some guitar players like the look of 3 side-by-side full stack Marshall amps? Synth players do the same thing, except all their keyboards are spread out and takes up more than triple the space.

"Gee. All that stuff must take a million wires to get that sound routed..."

You don't even know the half of it.

Not only does it take a crazy amount of audio cables to route all those synths to a master mixer - which in itself has to be huge to support all those channels - but then the synth nerd gets two really, really bad ideas.

...and out come the MIDI cables. Insanely. Long. MIDI. Cables. Now there are even more wires involved, combined with the fact no drum machine, a.k.a. rhythm composer, has a standardized shape. Custom platforms and/or additional desks must be built to accommodate that crap.

Oh, and on top of that, with the vintage thing you're adding in the problem of old, floppy diskette drives where the media is expensive and the drives don't work most of the time.

But wait, there are two more bad ideas.

If you've ever seen a synth nerd's "recording room", it is typical that every last square inch of usable space has been taken up by bulky equipment. That room, which could ordinarily fit 6 people in it easily, now can only fit 2. Barely 2.

Now I will admit, when you walk into a synth nerd's recording room, it looks damned impressive, almost as if you're looking at the cockpit of a space ship. When you sit in the captain's chair, you're surrounded by buttons, knobs, sliders and really cool-looking displays with rows upon rows of blinky lights. Don't even think about trying to figure out how anything works, because only the synth nerd knows that, given they built it from scratch.

At the same time however, you can't help but feel bad for the synth nerd. They have this room, filled with a mountain of electronics they spent a ton of money on that ultimately serves no practical purpose.

In the end, the synth nerd's recording room is only there to look cool because to them, it just feels good walking into that room and seeing that mountain of hardware. That's their little sanctuary. They escape from life into that electronic cocoon of theirs that they built whenever they can.

Yes, I know, I make it sound creepy. That's because it is.

If the synth nerd had any sense at all, he or she would sell off all that junk (most of it really is junk even when in perfect working order), buy a Casio XW-P1 and have just that, a few effect pedals, a laptop, a mixer and nothing else. And if the Casio's keys don't feel that great, get a Novation Launchkey and call it a day.

A lot of synths really are total crap

That Oberheim OB-Xa I mentioned above? Yeah, that thing. A lot of those arrived in the showroom broken. Yes, they got delivered brand new back in the day in busted condition where stuff didn't work right out of the box.

Does it still happen where synths arrive new that are broken? Yes. Why? Because things get jostled around in shipment and those tiny electronics inside synths don't handle shipping very well and pretty much never did. It is totally possible to spend $10,000 on a brand new workstation synth and have it arrive where half or more of it does not work at all due to internal crap that got busted up in shipment.

In addition, all synths have electronics problems because absolutely none of them age well. Everything that can go wrong will go wrong on a synth, even if it never sees a stage and is cared for meticulously.

Yes, the synth player is the worst hoarder of all musicians that exist. I know of no other that can fill a room faster with crap they don't need.

How does one cure music gear hoarding?

That will be a separate article. I've talked about it before but didn't specifically mention exactly how to cure gear hoarding ills. Watch for it.