The reasons why electric guitars do not use XLR

This is a valid question, and the answer is probably not what you thought.

If you've been around any musical equipment at all, you've seen the familiar 3-pin XLR connector, and it was almost certainly on a microphone cable. You've also probably seen XLR ports on various mixers and recorders. For example, the Zoom R8 recorder (seen above) has a pair of XLR ports in the rear (which are actually combo ports that can accept 1/4" or XLR.)

What types of XLR are there? This depends on how many pins are present. XLR can have up to 7 pins and has varying applications. Anything from stage lighting control systems to intercom systems to pyrotechnic equipment and so on.

The one I'm concentrating on is the 3-pin XLR technically known as XLR3. This is a standard for balanced audio signals.

What would the main advantage of XLR be on an electric guitar?

The main advantage is length of cable.

With normal 1/4" guitar cable you'll usually start hearing signal loss at lengths over 20 feet (6m.) Sure, you can buy 25ft (7.6m) or even 35ft (10.7m) guitar cable if you want, but it won't sound good because the signal will start dropping to the point where it will annoy you. Stay at 20 feet or fewer.

And how long can XLR go? You can easily use a 100ft (30.5m) length and well beyond that with no problem.

The second advantage of XLR is a stronger resistance to interference.

Examples of certain guitar types that do have XLR

Acoustic-electric guitars do exist with the appropriate pickup and XLR connector on board.

And you can get it fairly cheap!

This is an acoustic-electric where you can choose standard 1/4" or XLR, meaning yes, this guitar can plug direct into a mixer or PA with no problem at all and sound great.

Here's a view of the XLR on this guitar. Ibanez decided to separate out the 1/4" from the XLR, which works just fine: 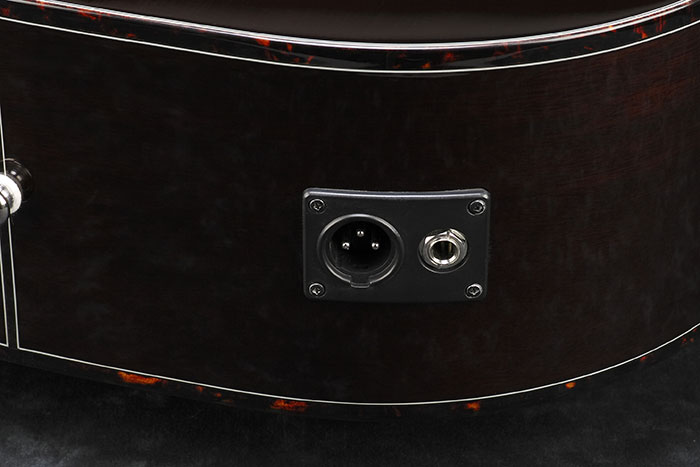 Has there ever been a "100% electric" guitar with XLR on it?

Yes. To the best of my knowledge there were some made in the 1970s, but absolutely none were regular production model guitars. Alembic for example did craft such a guitar, but of course it was a low production unit.

The most recent electric guitar that I'm aware of that had the real-deal XLR was the 2010 Gibson Les Paul Limited. It did have a combo port described by Gibson as follows:

Used with a stereo (TRS) cord and an external accessory box (both available separately), this feature allows you to split the piezo and magnetic signals to individual amps or PA or recording channels, further multiplying the Les Paul Standard 2010 Limited's sonic capabilities.

This model was a very high-tech guitar with all sorts of electric crapola in it, including the infamous MCK (Master Control Knob) along with low-impedance preamp and so on.

The whole thing was rather ridiculous, but yes it was an example of actual XLR on a solid-body electric guitar. It was not semi-hollow nor acoustic-electric.

What is the main disadvantage of XLR on an electric guitar?

A piezo pickup on an acoustic-electric guitar is a very low-output pickup. It has to be that way so the signal is clean when sent over the wire. And where the guitar's preamp system is concerned, its job is to boost and shape the signal cleanly, which it does. When the preamp is at the guitar, this allows the least possible interference to be introduced when the signal is amplified as it's the shortest possible distance from pickup-to-preamp.

A regular electric guitar pickup on the other hand has much greater output compared to a piezo or vocal microphone. You output that over XLR and a ridiculous amount of noise will occur. As in BUZZZZZZZZZZZZZZZZZZZZZZZ with absolutely no effects applied. Totally unusable.

What is the second biggest disadvantage of XLR on an electric guitar?

I will tell you exactly how to emulate what "the XLR sound" would be on an electric guitar.

Take any acoustic-electric guitar. Run it through a distortion pedal. That's it.

Even without an XLR connection, that's the tone you can expect. A brittle, nasty, trebly, boomy frickin' mess with feedback galore. You can adjust the preamp EQ all you want, but it won't make any difference whatsoever.

If you had XLR on your solid-body electric ran through regular pickups, that's the sound you'd get.

Could good electric guitar tone ever come from XLR?

Highly unlikely. It's not that it can't be done, but rather that guitar players simply wouldn't accept it.

XLR itself isn't the problem, but rather voicing a set of pickups and effects that players would go for.

A common tone guitar players chase after is that sweet tube-type amp sound when the tubes are "juiced" up nice and hot.

That sound can only be had when the electric guitar signal is sent to an amp where the end result sound is allowed to "break up." And this breaking up is a combination of the signal, how the tubes affect it and how the loudspeakers themselves (usually Celestion) project as more volume is added.

Making that sound happen over XLR naturally and not emulated where it's good? That's a challenge I wouldn't wish on my worst enemy.

It is all about the tone in the end

If it were true that going from unbalanced 1/4" to balanced XLR resulted in the exact same electric guitar sound either way, guitar companies would have switched over to it 40 years ago. But that's not how things are. What's used now does in fact make for the best electric guitar sound you can get.

Some say the reason guitar companies stick with 1/4" and don't switch to XLR is because of cost and no other reason. I disagree with that because it's far from just a connector issue. It's a tone issue, specifically revolving around pickups and getting them voiced right.

And besides which, the only real advantage one can get out of XLR on a solid-body would be greater cable length. If that's the goal, just go wireless and enjoy a range of over 70ft (21m.) Length problem solved. No need to reinvent the wheel.