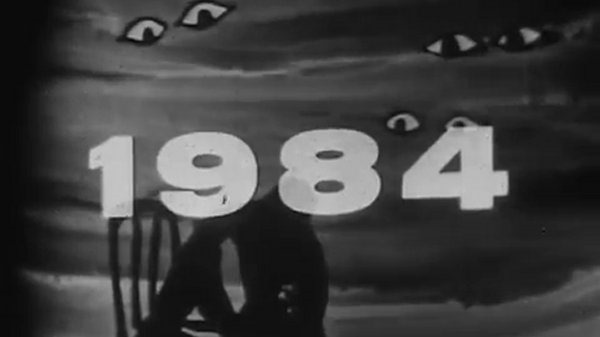 I had thought that I had seen every single screen adaptation of George Orwell's Nineteen Eighty-Four. I was wrong. There was one more. It happens to be the first screen adaptation, and the oldest all the way back from 1953 (yes, that makes it 60 years old at the time I write this). And, wouldn't you know it, it's an American version that originally aired on CBS as part of what was called the Westinghouse Studio One series (which started off as radio-only and then was brought to television later).

Can you watch the 1953 television version of 1984 right now? Yes, you can. It's on YouTube. Or at least it is as the time I write this. Part 1, part 2, part 3, part 4. Being it's from CBS it will eventually get pulled from YouTube, so find a way to download the video if it's still there at the time you read this.

Before watching it though, I'd suggest you read what I have to say about it first.

Of the four, the BBC version is the most true to the book, which I have read. And in '56 when it originally aired, there were more than a few viewers at the time who called the program "perverse". If you consider what the standard of entertainment was in the mid-1950s (which was generally very cheery), and how dark and dystopic Nineteen Eighty-Four is, well, you can understand how that would ruffle the feathers of a few people.

But anyway, the '53 CBS version is without a doubt the absolute weirdest screen adaptation of the story I've seen.

First of all, it was written as a play. So if you can imagine what Nineteen Eighty-Four would be like if it were performed on stage live, that is exactly what the '53 version is, artsy-farsty version of Big Brother and all. I'll talk about that more in a moment.

Second, some of the same people who did the CBS program went on later to do the 1956 film. You can basically consider the '53 version a prototype of the later film because of that. And yeah, that does mean the storyline is perverted into a love story between Winston and Julia instead how it's supposed to be told (it's supposed to be the journey of Winston's enlightenment and his defeat).

Third, it is really short. About 50 minutes. This is probably because it was meant to fit into a one-hour television time slot, per 1950's television broadcast standards.

If you watched this without knowing the story first, you would have no clue what's going on. None at all. It just moves way too fast. Huge chunks of the story are left out, and like in the '56 film, the '53 version renames certain characters. For example, Goldstein is renamed to Cassandra. Yes, really.

Big Brother himself is this artsy-fartsy oil-painted like... thing. When you see it you're going to say, "What the f--k is that?" Absolutely no resemblance to the way he's described in the book whatsoever. Not even a little.

Telescreens are simply shown as large panes with the best you could do in '53 for what could be considered a special effect. Just some washy-like screening and lighting of some kind.

I'd have to say the best part of the show is Cassandra during the Two Minutes Hate, because what he said was actually written very well.

Most of what he said:

Today you are at war with Eurasia. Tomorrow, perhaps with Eastasia; it doesn't matter. The primary game of modern warfare is to use up the products of the machine without raising the general standard of living. For if leisure and security and enjoyed by all alike, great masses of human beings who normally are stupefied by poverty would become literate and would learn to think for themselves! And once they have done this, they would sooner or later realize that the privileged minority have no function, and they would sweep it away.

That's just as true as it was said in '53 as it is today, if not more so; it is the highlight of the program just because of the good writing, and it's very true to the book.

The rest of the program however is just so unbelievably rushed. That combined with actors many times almost literally shouting as if they were performing a play for an audience just gets annoying.

I suppose I shouldn't knock the program too much because it was the first screen adaptation, and Nineteen Eighty-Four is a really tough story to tell visually.

Why did I watch it? Just to "complete the set", so to speak. I had seen the other three and thought that's all there were. So when I discovered this one, of course I had to watch it. 🙂

Ordinarily I do not like television from the 1950s, but with 1984 I make an exception because it's just interesting seeing different attempts at telling the same story because each has its own take on it.

Even though the story in the '53 version is told totally wrong in so many ways, I give it a thumbs-up anyway just because it's so weird and unique.