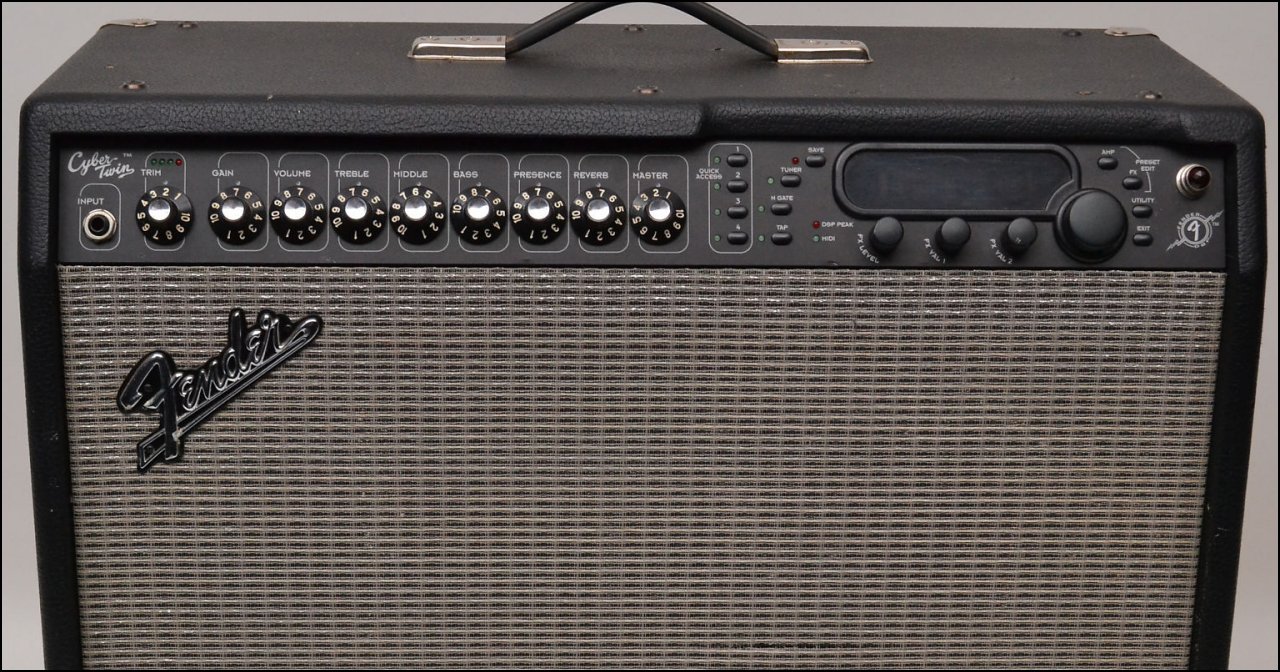 Sometimes timing is everything.

It's been a week since I traded out 2 guitars and an amp for a smaller and much tidier replacement amp, the Line 6 Spider V 60.

I can honestly say I'm happy with what I have. No regrets...

...but I'm keenly aware that what I did is not something I could have done even as little as 3 years ago.

Modeling amp tech at this point is pretty darned good. But there was a time when it wasn't. Early versions of digital guitar amps were expensive and had problems.

It's 2018 as I write this, and the Spider V line of amps from Line 6 didn't exist until 2016. And based on what I've seen, the V is definitely a significant improvement over the IV in all the right ways. But even so, the Spider IV series from Line 6 was pretty good.

However, if we rewind the clock back to 2000s, yeah, things were a bit weird then.

The example I'm going to use is the amp seen above, the Fender Cyber-Twin. The is a 2x12 beast that was introduced all the way back in 2001. A later version came along later called the Cyber-Twin SE, but what I'm going to concentrate on here is the first non-SE model.

The Cyber-Twin was one of the most technically advanced modeling amps available at the time with a well-into-4-figures price tag. Fender claimed it wasn't a modeling amp, but I don't buy that at all. Yes, it was. It was big, it was heavy at over 50 pounds in weight, it was complicated, and sometimes it was unreliable.

Some owners of the first generation Cyber-Twin discovered the amp was not ready for prime time and had overheating issues. Not all Cyber-Twin amps exhibited this problem, but several did.

For those that didn't have a Cyber-Twin that overheated, they became frustrated with the operation of the amp because what Fender did with the control area was ridiculous. You had all the controls plus a few extra you'd find on a traditional amp and all the digital stuff on the top control area. This means you have 9 regular amp knobs, 4 digital knobs, and 12 buttons. Way, way too many controls.

What turned people off from this amp the most were the ridiculously complicated controls, the fact it was too loud for its own good and could not be played quietly (no way this could be played in an apartment,) and the most damning thing: It didn't want to make you play your guitar.

When an amp is so annoying to use that it actually makes you put your guitar down, that's when you know it's a stinker. And that pretty much sums up 2000s digital guitar amp tech in a nutshell.

Where 2000s guitar tone digital modeling was concerned, the cream of the crop was rack units. Those were the processors that really sounded right. And that's exactly why I bought a DigiTech GSP 1101 back in the day. Later on when I parted with my 1101, I got the RP360 which has pretty much everything the 1101 had, except in a floor unit.

There's a whole swath of 2000s-era modeling amps from Fender, Peavey, VOX, Line 6 and a few others out there. A lot of people bought these things, and many still work.

Is it worth it to buy a 2000s digital modeling amp? No. If you already own one, that's a different story. But to actually seek one out really isn't worth the bother since newer models are so much better in every way.

Some amps are best left in the past.