yay, free skype account for absolutely no reason at all

In yet another example of Stupid Crap That Happens With Rich's Yahoo! Account, I check the account and get this email: 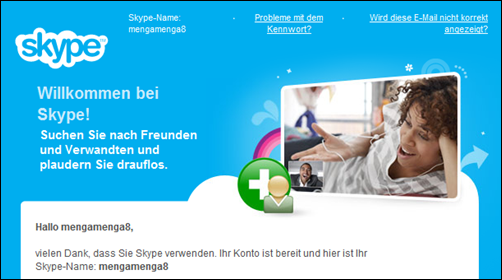 Hey, cool, a new Skype account - THAT I DIDN'T SIGN UP FOR in a language I don't even speak. Yes, it's a real email and not a spoof/scam/phish.

Somehow someone managed to register a Skype account with my Yahoo! email address. I can't even tell you how that's possible being you have to confirm your address in order to do that - but it happened.

I said "Well, fuggit, as long as it's registered...", go to login to Skype, hit 'Forgot Password', had the system send me a new temporary password, used it, reset password and now the account I'll never use is officially mine.

And this is one of several reasons I'm happy I don't use Yahoo! as my primary email anymore.

the internet is starting to get respectful again

Three things that happened this month which leads me to believe the internet as a whole is starting to become a better place.

First, a major 'lulz'-friendly site decided to do a ginormous-sized cleanup of their content, which in included but wasn't limited to the removal of nearly all instances of the "n" word, any/all articles posted that were considered 'unfunny' attacks on other people, and removal of a very large amount of grotesque content. This is, ironically, probably the most shocking thing they've done in the history of the site. Rumors on the site's forums spread like wildfire as to why they decided to do this. Some said it was to make the place more ad-friendly to generate some more revenue. Others said that the main site moderators were just plain sick and tired of seeing every other new article submitted have the "n" word in it. Maybe it's a combination of both, who knows. Of course, there are plenty who say the site is now dead as a doorknob because of these new restrictions. I doubt that, but the place is certainly a whole lot different now.

Second, a YouTube 'movement' comprised of misogynists that blamed the government and society for their inability to get a date (yes, really) is now officially dead. It was run by two guys. One was a middle-aged redneck and the other an obese gamer in his 30s who still lives with his mom. The movement ended when the redneck got fired from his job, then admitted in a YouTube video that the entire reason he started his 'movement' was because of one woman who couldn't put up with his crap anymore and dumped him; this proved to everybody that the entire 'movement' was complete nonsense from day one. The redneck shifted gears into crazy-insane mode and has since moved out of state to go stalk his ex-wife. The obese gamer, realizing everyone now knows the 'movement' is 100% nonsense, quit by means of posting a farewell video.

Third is something that's been building up for a while now. Every few years or so the internet goes through a phase where absolutely nothing is funny. The reason for this is because everything you see is a repost of something you saw before. As everyone knows, a joke is only funny so many times, but when everyone starts telling the same joke, it becomes kitsch.

A few examples of current internet kitsch are:

The current style of image macro started with Advice Dog. The full definition is here. You'll find Advice Dog funny for about a whole 30 seconds, and then get sick of it.

People got sick of the dog, so they started to do the same thing with other animals, such as Bachelor Frog (defined), and then the extremely-unfunny-the-moment-it-appeared Bachelorette Frog (defined).

Animal image macros stopped being funny last year, yet people are beating this to a pulp. Hopefully one day it will end completely.

Watch this video and see if you laugh at all:

That's right, you didn't laugh. In fact I doubt if you even cracked a smile. You sat there, watched the above, said "Um.. yeah. Stupid."

This crap stopped being funny a long time ago. It's to the point where people make fun of others who post anything labeled as a 'fail'.

Brandon Hardesty posted a parody video of this (below), and wow did he nail it. And yes, it's purposely meant to annoy you.

Will things get better?

They've already started to. I'm definitely not the only one who's identified the kitsch, and as such people are abandoning the crap in favor of greener pastures on the internet. Where will that lead us? Nobody knows yet. If we were all in a 12-step program to get the funny back online, I'd say we're on step 9.

I'm using the IE9 browser a lot these days, but unfortunately something I have to deal with is that smaller fonts look like absolute crap - and there's no way to disable it. In beta IE9 you could disable the GPU rendering and fonts went back to normal, but now you deal with this garbage: 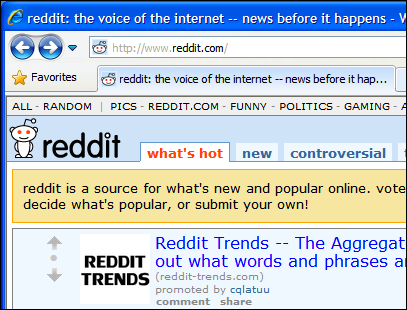 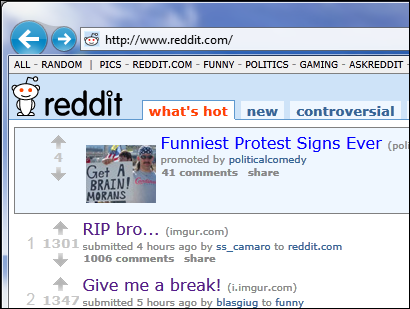 You may not notice a difference at first, but trust me, it's there. The top gray bar in each screen shot is where you see it the most. Previously, smaller fonts were all crisp and now they look "smudged" for lack of a better descriptor.

According to the threads I've been reading on the subject, Microsoft's response to this is "Deal with it" because they are absolutely convinced jacked-up-looking small fonts are better.

Using Compatibility View fixes the problem; I found this out completely by accident. 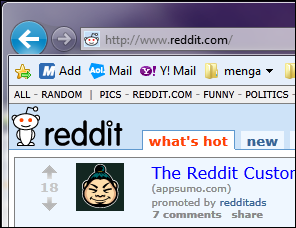 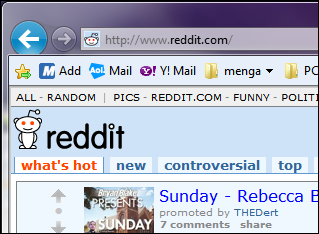 I can't tell you how happy I am I found that feature, even if by accident.