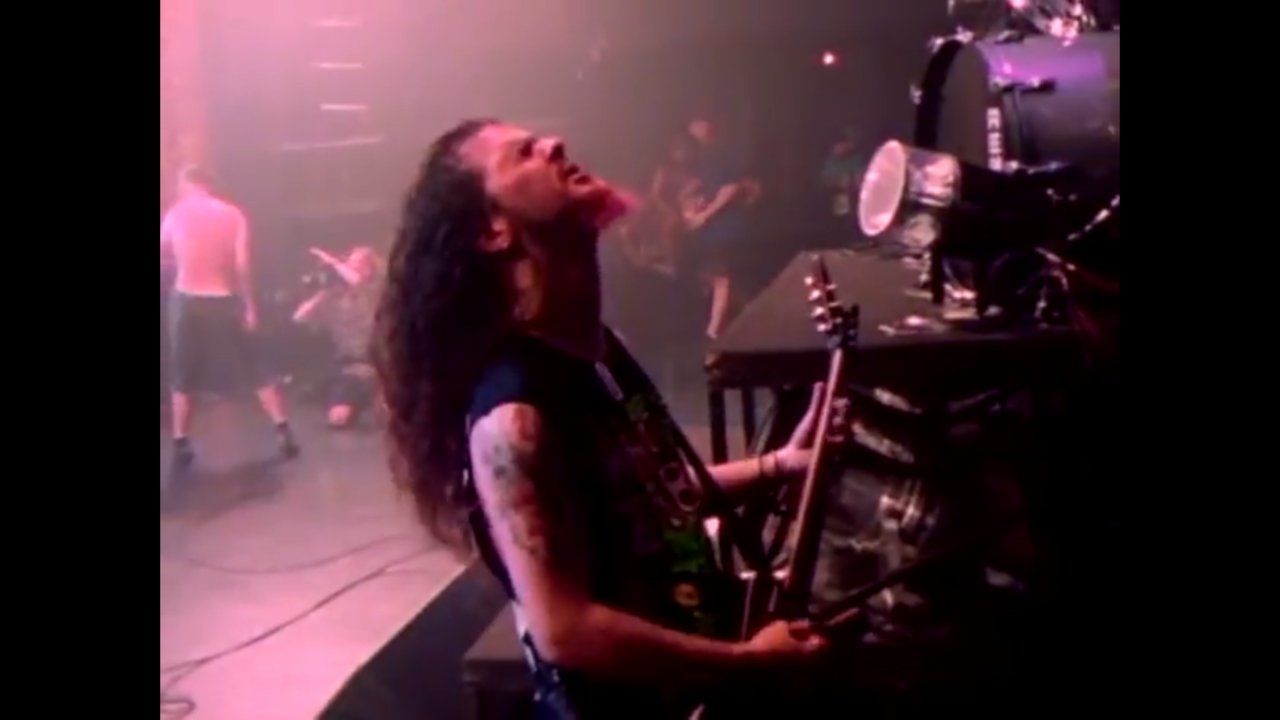 This sound is actually not difficult to achieve when you know how it was done.

There are a lot of metal guitarists that think that Dimebag's tone was amazing, specifically on the Vulgar Display of Power album.

I'll tell you how to get that guitar sound, but before I do, know this: It's actually a really crappy sound.

Why is Dimebag's sound so crappy? Because on its own, it's nothing but awful '90s era solid-state digital junk. Dimebag was known to use Randall solid-state amps and Korg (yes, Korg) digital pedal effects.

Today, we have proper digital amp modeling technology that actually sounds right, such as with the DigiTech RP360 or even the cheapest Fender Mustang amplifier. But back in 1991 when Vulgar was recorded, guitar tech was in this weird state where it was a mishmash of '70s solid-state and late '80s/early '90s digital nastiness.

I'll use Walk as the example and explain how to get this. First I'll describe the guitar you need, the rhythm sound, then the lead sound.

Which guitar to use?

All you basically need here is any guitar that has a pair of high-output pickups. Even a cheap Squier Mustang HH would work.

If however you also want to capture Dime's lead tones, you'll need a guitar with a proper Floyd-Rose style tremolo system. And by proper I mean the kind that won't fall apart in a year from regular use. The guitar I suggest here is Schecter Hellraiser C-1 FR.

It's very obvious the guitars are doubled to add in mids and bottom end. My ear hears this immediately, which tells me one recorded guitar on its own during recording sessions wasn't good enough.

If recording at home, this isn't a problem to recreate. Just record the rhythm guitar twice and then adjust levels.

In a live situation, the easiest way to simulate this is to use a digital delay pedal like the BOSS DD-7. What you do is add one very short repeat, almost like a slap-back delay. The end result of this is a tone that has more mids and bass. It won't sound exactly like doubled-up guitars, but it will be real close.

On Walk, this is nothing but neck pickup. It was EQ'd to be nothing but midrange frequencies. There is no bass and not much treble going on either.

If you're a metal player, you know what "scooping the mids" means. This lead tone is the exact opposite of that. Instead of mid down/bass up/treble up, it's mid up/bass down/treble down. This is what was done in the studio to allow the lead guitar sound to cut through the mix and be heard.

A ridiculous amount of distortion was used for the lead tone. At no time during the solo does Dime pause significantly between notes, because it's probably true if he did, a BUZZZZZZ (pickup noise) would have been heard from all the crazy amounts of gain used. You'll also notice at the end of the solo, the lead guitar is very quickly cut out of the mix, again to prevent hearing that BUZZZZZ...

As idiotic as this sounds, the way to get this sound live is to actually use a second gain pedal. Overdrive, specifically. Yes, I am literally saying to overdrive your distortion.

Before telling you what pedal to use, know that distortion + distortion is bad. It won't work, sound terrible and the sound coming out of the amp will actually get quieter.

The pedal that will work best for layering over your distortion for a Dime style lead tone is a cheap BOSS SD-1 Super Overdrive. That pedal has exactly what you need. Drive, level, and most importantly, tone.

If you're crafty enough, you could actually use the bridge side pickup and make it sound like a neck pickup. How? Turn the tone control on the overdrive pedal down. Will it work for you? It might. If it doesn't, just switch to your neck pickup instead. No big deal.

Will distortion + overdrive be a buzzy mess? You will get some buzz and there's just no way around that. When adjusting your overdrive, don't just crank it up all the way. Use only what you need to get the sound you're chasing after, and remember that when soloing, don't stop between notes or buzzy nastiness will break through.

Solos aren't that long anyway, so you can kick on the overdrive for the brief time needed, then kick off when going back to the rhythm sound.

There's really no magic to Dimebag Darrell metal tone. It was early '90s nastiness combined with doubling up guitars. You can use any guitar you want as long as it has high output pickups. And for the solo stuff, Floyd-Rose is needed for that.