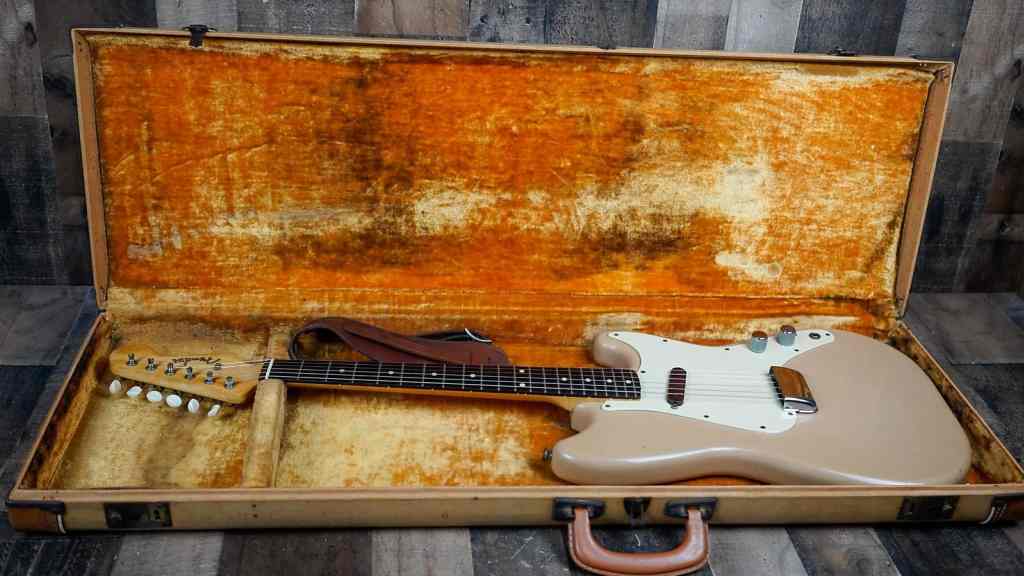 It's real-deal Fender vintage, it's available, and there's one other rather nice advantage to owning one of these.

My reading audience goes all over the place as far as age is concerned. This one in particular is for the older gents with hands that don't work as well as they used to.

Firstly, the Musicmaster shown above is from a Reverb shop called A Flash Flood of Gear out of Meritt Island FL, and you can see a bunch of other ones on Reverb, so if you want to know where to find these things, there you go.

Fender Musicmaster was Fender's student guitar. The vintage ones are from 1959 to 1964. While true the guitar was made all the way up until 1982, of course the best ones are the pre-CBS era '59 to '64 models.

What makes the pre-CBS Musicmaster possibly the ultimate retirement guitar is that it has a super short 22.5" scale. This guitar was designed from the start to be a very easy player. What that means is you get real Fender, real vintage, and something that's easier to play than a Stratocaster or Telecaster.

As far as I'm aware, all the vintage Musicmasters are top-loaders, meaning that in addition to the super short scale making it ridiculously easy to play, the top-loaded strings lessens the tension for even easier play. You could load heavier gauge strings on a Musicmaster and still have a very easy-playing guitar.

This guitar is obviously meant for cowboy chord playing and not soloing, especially considering it has a 7.25" fingerboard radius. The Musicmaster is the very definition of a no-fuss guitar. One volume control, one tone control, one pickup. Plug in and play.

I have to admit the Musicmaster is an endearing and even lovable guitar. It's just a small, light and simple little thing, which is something older gents appreciate a lot because they don't like complicated stuff.

I think the only kind of guitar that's even easier to play than the Musicmaster is a classical guitar, meaning a nylon string acoustic. But of course that's not an electric. Okay, that's technically not true. Acoustic-electric nylon string guitars certainly do exist, such as the Cordoba GK Studio or the highfalutin Takamine TH90 (which is gorgeous by the way), but that's still altogether different from an all-electric guitar using steel strings.

Concerning price of a pre-CBS Musicmaster, this is what I have to say about that:

The pre-CBS Musicmaster is far less in price (by literally tens of thousands) compared to a Stratocaster or Telecaster of the same vintage. Yes, you will spend some coin for a pre-CBS Musicmaster, but it is one of the most accessible Fender vintage electrics you can buy simply for the fact it's not the price of a new car.

And remember, the Musicmaster is the easier player for the reasons I stated above. It's a simple little vintage Fender guitar of joy that's actually attainable.

Is there an alternative that's new and cheap? Of course there is. Not by Fender but by Squier, the Classic Vibe Mustang. That's a short scale (24.0" scale, specifically) electric. Not a Fender, but it looks cool and is a very easy player.