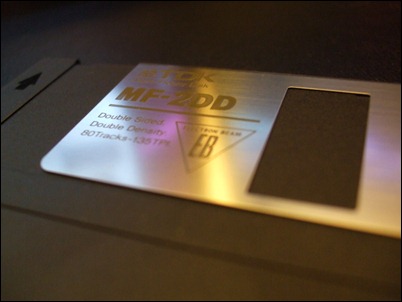 I never really used floppy disks that much, and only did because I had to and not because I wanted to. And man did it tick me off when they went bad, which happened a lot. Back in the day there was this WWF wrestling game I had for my Commodore 64. It was expensive and I really, really liked playing it. It was two 5¼-inch floppies and then one day the second disk went bad, even though I oh-so-carefully took great care of the disks and properly put them away after each use. I was not happy. Just about all of my other memories with floppies are exactly like the one I just described. The floppy was just notoriously unreliable. It wasn't a matter of if they would fail but when.

Above is a photo I took of a new unused 720k disk I have in my possession. One of three, actually. They're for my Alesis Datadisk which I no longer use. When I bought the thing, the eBay seller was nice enough to provide a 10-pack of double-density disks with it. Why DD disks? Because the Alesis can't use high-density. All that would happen if you chucked a 1.44MB disk into the Alesis is that it would format it at 720k because for whatever reason, Alesis didn't use a high-density floppy drive in the Datadisk.

I wondered if those 720k floppies were still usable, so I attempted to format them. I discovered you can't format a 720k floppy in Windows XP or any Windows beyond that unless you use FORMAT from the command line a very specific way, which is:

That formats 80 tracks with 9 sectors per track, and the floppy is at that point usable; you can copy files over to it and whatnot: 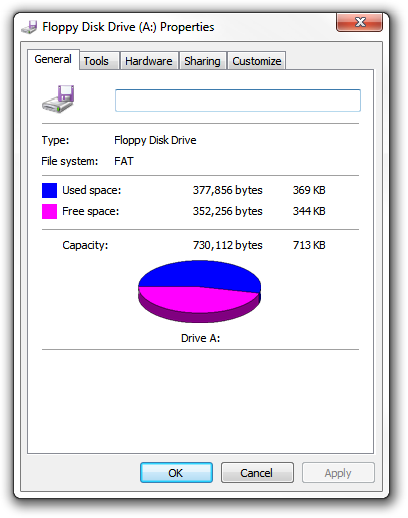 Why did I bother doing this? a) just to see if I could, and b) they wouldn't be usable in my Win7 box otherwise since that OS cannot format a 720k floppy.

Come to think of it, I should replace it with a card reader.

EDIT: Bought a card reader. 17 bucks, shipping included. Will arrive before the end of the week. Time to kick that floppy drive to the curb. 🙂